The rift in the U.S., just like at home 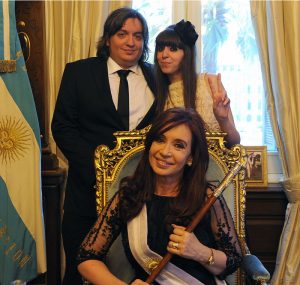 Great polarization, deep rift, religious partisanship. All these descriptions applied to the political and social reality in the United States sound familiar to me. The division – deepened by a controversial leader in recent years – has worsened in the run up to the presidential election in the United States and in my home country, Argentina.

Here and there, citizens have taken opposing sides, leaving little room for those in the middle. President Donald Trump in the United States and the Argentinian former President Cristina Kirchner, now running for the vice presidency in the October general election, are both polarizing in their respective countries’ politics. Although only the American president is the subject of love and hate beyond the country’s borders.

The parallels between the two leaders are not related to their policies, but to their historical political weight, impact on social relationships and attitude toward the press.

“There are some friends with whom I don’t hang out anymore. They’re Trump supporters and there are many things we can’t discuss,” said a Democratic attorney from St. Paul, Minn., who requested not to be named in this story.

The same comments are repeated in Argentina. Andres Oppenheimer, an Argentinian journalist living in Miami and CNN anchor, compared the political landscape in both countries. “The rift and polarization are similar,” he said. “I’ve been personally insulted at the airport by a Kirchner supporter for my opinions.” In his latest column, he argued that “Argentina is digging its own grave,” after the former president’s party received a large majority of the votes in the primaries in August.

During her and her husband Nestor’s administrations (2003-2015), the couple proved not to be a fan of freedom of speech, constantly discrediting newspapers and journalists personally. In the same vein, members of their cabinet displayed decorations, like air balloons with the words: “Clarín miente,” meaning Clarín – the largest national newspaper – lies.

Cristina would also show blown up copies of stories in La Nación, a prestigious Argentinian newspaper, in public appearances, alleging they were fake news. She had her own ways of calling journalists “enemies of the people.”

Some of the pieces were about inflation, as the rate was unknown after the official intervention of the statistics institute. Others were about corruption: she is now being prosecuted in a dozen cases.

Although during these years, her government provided disproportioned support through public advertisement to other media outlets that were softer in their coverage. That prevented her from generalizing her attacks to the press. Like in the United States, polarization became evident in media, too.

Like Trump’s message, her rhetoric has been divisive in a way our local politics haven’t seen for a long time. In the 2013 midterm elections, the campaign of Raúl Alfonsín, a referent of the Radical party, claimed to reunite two contrasting entities divided in two: “Argen and Tina.” It has just gotten worse in the last few years.

Is it this reversible? Like in the United States, the rift remains open, even after five years of Mauricio Macri’s administration. He didn’t find a way to fix the country’s economy and reduce poverty, despite this being part of his campaign mission.

While many believe it might come to an end in the United States, populism appears to be coming back in Argentina. The past doesn’t seem to have taught enough to the electorate. A majority is going back to a formula that didn’t work in the country, instead of looking for a third option to leave polarization behind for once and for all.