Three ways the U.S. media is focusing on the audience

Almost a quarter of Americans are monthly podcast listeners, according to Edison Research, and some U.S. media organizations are trying to offer the audience a richer experience. 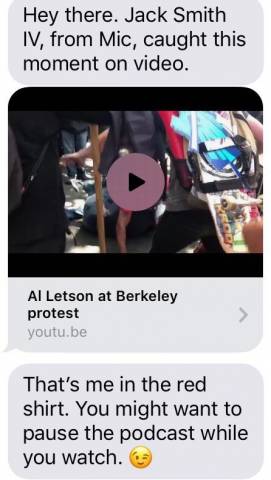 It’s an approach the Center for Investigative Reporting (CIR) has been testing with a new tool called Amplify. An SMS chatbot enables the audience of its Reveal podcast to text a number while listening in order to receive extra details, such as video footage and pictures.

Its first experiment, about vitro fertilization, was published in June. Its second, about protests in Berkeley, Ca, aired on 23 September.

The second episode was chosen because of the strong visuals, Robert Rosenthal, executive director of the CIR, said. Reveal’s host, Al Letson, got caught up in the violence when he protected someone who was being attacked at the anti-hate rally, and the incident was captured on film.

About 2,600 people used Amplify during the episode, with the team sending around 12,500 text messages, according to the CIR.

The experiment came after research showed people often looked things up on Google or Wikipedia as they were listening.

Facebook has become an integral part of most newsrooms’ publishing strategies, but some media companies are investing more time in using it as a resource. Elizabeth Dunbar, a reporter at Minnesota Public Radio, created a private Facebook group to start a conversation with readers and potential sources in August. Her goals were twofold – to connect a variety of people with different perspectives on the food industry, such as rural farmers and urban supermarket shoppers, and to allow their discussions to drive her reporting.

“I want to know the real issues, topics and themes people are debating,” she said, adding that her role was to moderate the community, and that everything was off the record, unless she asked permission.

Dubar’s project is still under way, so it’s too early to see how successful it will be. But the signs are good. The Facebook group it was modeled on, a project by Spaceship Media that connected 25 female Hillary Clinton voters from San Francisco with 25 female Donald Trump voters in Alabama after the 2016 election, produced plenty of journalism, and is still going strong. 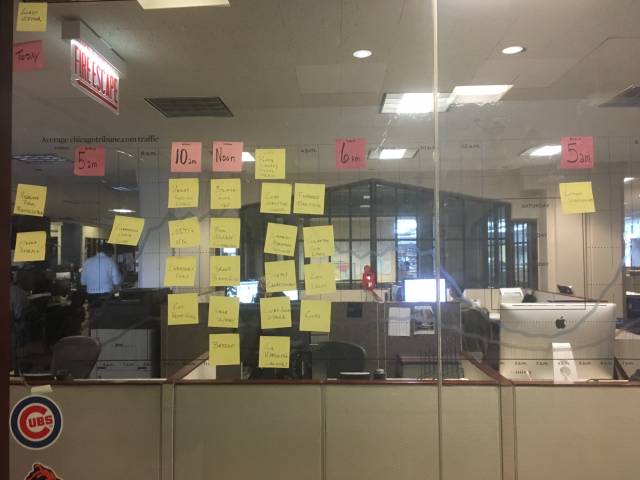 Digital media organizations have been analyzing audience behavior to try to bring more data-informed decision-making to the editorial process for a few years. But the Chicago Tribune has a creative approach to keeping its audience at the heart of its journalism – and it involves lots of pink and yellow Post-It notes.

It also involves a “digital control board”, a graph which shows the typical reading habits of its audience – heavily mobile in the morning and evening, largely desktop at lunch – which is carved into the newsroom’s glass wall.

The Post-It notes have an important role in the morning meeting. As stories are discussed, the managing editor Peter Kendall assigns them to different Post-Its. He then sticks them on the graph at points in a 48-hour period to try and optimize their impact.

“Obviously some publication times are driven by news events, but the idea is to publish exclusive stories and features when the audience wants them,” he said.