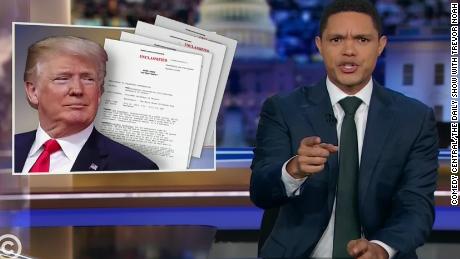 The media is awash with the Trump-Ukraine phone call scandal. Everyone is analyzing it their own way. Read transcript here

Thanks Mr. President for this “wonderful conversation” with your Ukrainian counterpart.

He also said: “This was largely a congratulatory call, a call about corruption. It’s just a wonderful conversation between two heads of state. There’s no evil in that.”

But that’s according to you Mr. President.

To us, it’s a whole different story, not “just a wonderful conversation,” and not “Fake News” this time. It’s our turn.

Trump who has long lashed out at the media, now is being hunted by the watchdog.

“We have to be clear that what the president is claiming to be corruption isn’t that and that the president is taking the germ of something and magnifying it and trying to make it sound shady. And there is even a larger issue here, which is that the president of the United States, if this is proven to be true, is appearing to have exerted pressure on a foreign leader to investigate one of his political opponents and potentially linking that to financial support for that country, Ukraine”, said Tamara Keith, NPR White House correspondent, during a white house briefing.

On Wednesday, the White House released a summary of President Trump’s July phone call with Ukrainian President Volodymyr Zelensky, which is now under scrutiny as part of an official impeachment investigation that House Speaker Nancy Pelosi launched on Tuesday.

The details of the conversation and what they do or do not prove about Trump’s culpability are being closely analyzed and hotly debated across the media. Unsurprisingly, there are significant disparities in the way conservative and mainstream news outlets are covering the breaking news.

For one thing, mainstream outlets are more focused on questions surrounding the very nature of the document that the White House released.

Some are referring to the document simply as a “transcript” of the call between Trump and Zelensky. Yet others continue to analyze and ask questions about the accuracy of the “transcript” given that the document was released with a note of caution, because it is not a verbatim transcript.

The New York Times’ main article on the document refers to it as a “reconstruction of a July phone call”. Click Link

Articles in the Washington Post and the Wall Street Journal have been referring to the document as a “rough transcript” and not “verbatim.”

Meanwhile, most conservative outlets, which have been stating there was no explicit quid pro quo of aid for investigating a political rival, did not qualify the term “transcript.”

When it comes to the actual contents of the document, conservative and mainstream outlets have at times emphasized different portions of the conversation. The debate rages on…

This is all important. The media is doing its job of informing the public, investigating and digesting issues.

But here’s what’s important to me.

What would it take for congress to impeach President Trump? How does the process work? And how much impact will it have on Trump? News site CNBC puts it clearly here.

The blueprint for impeachment is laid out in the U.S. Constitution in Article II, Section IV. The clause says that a president can be removed from office following “Impeachment for, and Conviction of, Treason, Bribery, or other high Crimes and Misdemeanors.”

The “high crimes and misdemeanors” clause leaves a wide latitude for Congress to press charges and would be the most likely justification of Trump’s impeachment.

Unlike a normal court proceeding, impeachment is a process that happens exclusively in Congress.

The House of Representatives initiates the process, charging the president with violating at least one of the three offenses. Any member of the House, regardless of party, can propose charges. Then, only a simple majority vote is needed to start the process.

A simple majority in the House would also determine whether the president is impeached – by the House. Then the conviction of the president needs to also be approved in the Senate. For that to happen, at least two-thirds of the Senate, or 67 members, must vote to convict the president, resulting in his removal from office. Currently, the Senate has 53 Republicans, 45 Democrats and two independents who usually vote with the Democrats.

Presidents Andrew Johnson and Bill Clinton are the only presidents to be impeached by the House, but the Senate did not vote to impeach either. So, no president has ever been convicted and removed from office. President Richard Nixon resigned from office before impeachment ever came to a vote as a result of the Watergate scandal.

An impeachment and successful removal from office wouldn’t clear a president of any criminal charges he might have committed before, during or after his presidency. This means the president could still face criminal action and be thrown in jail if the charges are severe enough or for other crimes.

If Trump’s impeachment led to his removal from office, Vice President Mike Pence would serve out the remainder of his term, set to expire on Jan. 20, 2021.

We are “all ears” to where all this leads.