When deep fried on a stick is no longer funny 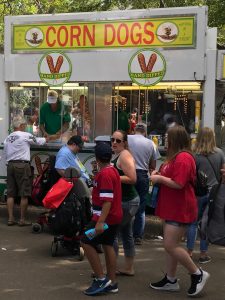 A sausage wrapped in cornmeal batter, deep fried, dressed with mustard and ketchup is the most popular food on a stick at the Minnesota State Fair. Just one of a varied menu that includes a bucket of chocolate chip cookies among its top-ranked options.

Everything seems permitted regardless of age during the visit to the state’s Great Get Together. But this reality goes further than the annual fair event. The poor diet is part of an extended habit in many Americans’ routines.

The obesity rate among adults in the United States is 40%, and including overweight, the figure reaches a total of 70,1%, according to the most recent data compiled by the OECD.

This is a major health issue.

In a column published by The New York Times, Dan Glickman, former secretary of Agriculture (1995-2001), along with the cardiologist Dariush Mozaffarian, highlight some figures that expose the problem in the United States: more than 100 million Americans, almost half of the adult population, have been diagnosed with pre-diabetes or diabetes, official figures show. Even more people suffer from cardiovascular diseases, which cause about 2,300 deaths per day in the United States.

Experts believe this is related to what people are eating, which is not only affecting themselves but also the public funds. The United States have the highest health spending among OECD countries.

Health care is again in the center of the political scene, like it was in the run for the presidential election in 2016, when Donald Trump promised to repeal and replace the Patient Protection and Affordable Healthcare Act, the so-called “Obamacare”. Now, it’s one of the central topics discussed in the pre-primaries campaign, especially in terms of coverage and high costs.

Glickman and Mozaffarian suggest to change the angle of the debate: “No one is asking the far more simple and imperative question: What is making us so sick, and how can we reverse this so we need less health care? The answer is staring us in the face, on average three times a day: our food.”

The problem is not new, but it’s not getting old either. The American diet has been addressed in the documentary “Super Size Me” (2004), and a version of the subject with a different angle, “What the health?” (2017), is now available on Netflix.

It is well known that portions in American restaurants are more than often oversized, not to mention the price of fruits and other healthy food always are in general higher than sweets or fast food.

When she was First Lady, Michelle Obama promoted the “Healthy, Hunger-Free Kids Act”, a federal statute signed into law in 2010 by President Obama, aimed at improving children’s nutrition as part of a broader fight against childhood obesity. The plan, which eliminated some products from school lunchs and set other limitations to sodium and sugar, was frozen in 2018 under Trump’s administration.

Buttery cookies, muffins, donuts… None of these are easy to avoid, and neither are their nutrition fact labels that describe calories and fat in the packaging, as the national law dictates.

Nevertheless, with health care again in the spotlight, the upward trend of obesity over time at all ages has proven to be dangerous enough to earn a line in the political debate.

Monday would be a good day to begin.