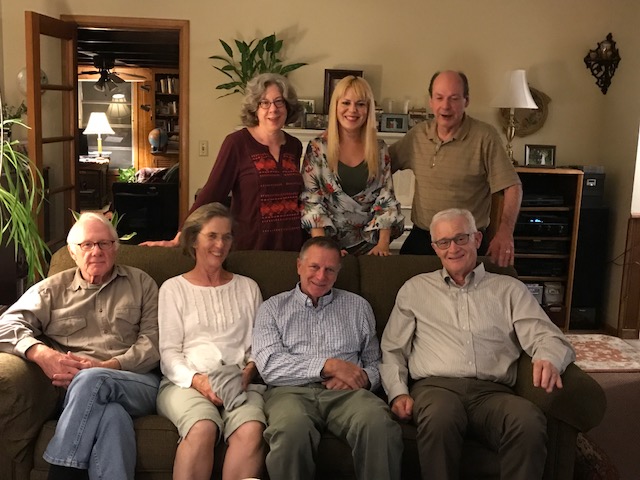 When Donald Trump shows up for dinner

It’s Saturday evening at Marcie and Steve’s home in suburban Minneapolis and their guests are chatting amiably over dinner. Marcie and Steve are one of my lovely host families in the Twin Cities.

The house is as cozy and welcoming as its owners. There’s a white piano in the living-room – Marcie insists that she can’t play well but Steve says otherwise – and framed family photos of the couple and their two children. The couple’s eldest daughter works for an NGO in Africa and on the coffee table lies a biography of Liberian president Ellen Johnson Sirleaf that Marcie borrowed from the library to keep abreast of African politics.

Tonight Marcie has made quiche – one of my all-time favorites – and a wonderful array of salads, including a delicious Brussels sprout and apple salad with balsamic vinegar. I make a mental note to ask Marcie for the recipe.

Before retirement, Marcie used to work in caucus research and she says Ed, a gentleman with gray hair and glasses who’s sitting opposite me, used to be her boss. “That was fake news before fake news even existed,” he jokes.

Fake news, a type of journalism or propaganda that relies on exaggerated and misleading headlines in order to deliberately misinform the audience with an ulterior political motive is a hot topic right now, with Donald Trump repeatedly using the term to silence critical media reporting. Not surprisingly, it has been one of the main topics of discussion during the seminars and debates we’ve attended during the fellowship program with Michael O’Donnell, a chair and professor of communication and journalism at St. Thomas University, focusing his presentation on how the media has reported Trump’s Twitter-storms.

Attending seminars and presentations is certainly useful. However, it’s the everyday exchanges with ordinary people –  the folk you meet at dinner parties, such as this wonderful gathering hosted by Marcie and Steve, or the conversation you have with the Somali-born Uber driver on the way home – that often give you the best insights into the inner working of a country and it’s politics.

Given that Minnesota is a predominantly Democrat state, it’s hardly surprising that most people we meet are staunchly anti-Trump. In fact, the only pro-Trump supporter I’ve met so far is a farmer from Tracy who said he voted for Trump because he was “the lesser of two evils.” He said he had bought into Trump’s anti-regulation rhetoric, but now regarded his president as an embarrassment, which is hardly a warm endorsement.

Marcie and Steve are now embroiled in one of the anti-Trump camp’s favorite debates: whether or not their orange-faced president will last the full four years or will be impeached before his term ends.

Marcie regards Melania and Ivanka Trump as the president’s Achilles’ heel and believes Trump will resign when he can no longer stand the media attacks on his family. Steve, on the other hand, believes that’s just wishful thinking and is adamant that Trump will only leave when he’s forcefully ejected.

As we move to the living room for coffee and blueberry cake, I can’t help thinking how Trump is never invited to dinner but he’s certainly always there.