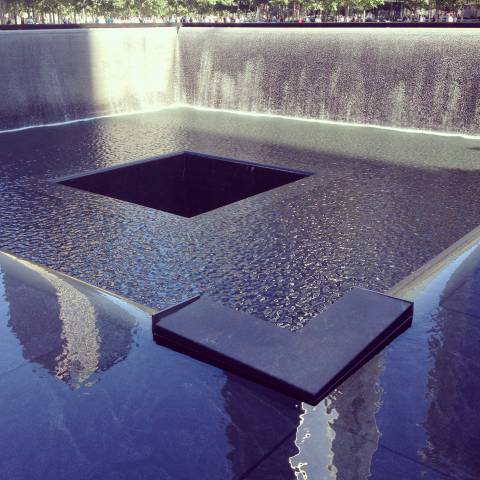 Why 9/11 still gives me goose bumps

Windows on the World, it was called. And I remember that the view from the 107th floor of the North Tower, one of the Twin Towers in New York City, seemed to be exactly that to me. So high up the horizon wasn’t its usual flat, but became a slightly bended line, revealing the roundness of the Earth. It invoked feelings of being small and insignificant; a humbling experience.

I had decided to end the summer of 2001 on top of the Twin Towers after spending more than two months in the city. I was 21 and this had been a great adventure: getting by in a place so different from my home. I’d come to love every corner of New York: the grittiness of the subway, the beauty and tranquillity of Central Park, the concrete jungle, the herds of people all trotting the streets looking for success. I had ventured from club to club, from museum to museum, from theatre to theatre and met wonderful people along the way. Now it was time to say goodbye in style; I took the elevators to the top of the North Tower to see the sunset one more time. Bye Statue of Liberty, bye Empire State Building, bye Times Square, bye Big Apple!

I returned to the Netherlands. Just fourteen days later, on the 11th of September, two airplanes flew into those towers. Another hit the Pentagon and a fourth crashed near Shanksville, Pennsylvania. I remember seeing it all live on tv: the crash, fire, smoke, explosions, people jumping, the buildings cracking, and finally the dust while they collapsed.

The phone lines went dead and I couldn’t reach my newly-made friends who were living in the vicinity of the Twin Towers. I was worried, shocked and scared. As the towers crumbled, the world I had come to love and had wanted to be a part of also fell apart. A new era of fear, wars on terror and insecurities was about to commence.

Last week I found myself back in New York City with the chance to visit the 9/11 Memorial Museum. It opened in May this year. The footprints of the Twin Towers are now two huge pools, with water running down from the edges. In the pools’ reflections you can see the new Freedom Tower, now the tallest building in the city. It sticks out in the skyline like a shiny middle finger to the terrorists.

The Museum contains sections of the concrete walls of the Twin Towers, as well as twisted pieces of metal and hundreds of bits of memorabilia from that day: bent glasses, wallets, credit cards, rocks, pieces of paper, notes, final phone conversations. There are lots of pictures, timelines and video’s. It’s an emotional trip featuring impressive artwork.

Did I like the Museum? Well, it has a strange connotation to it for me, since 9/11 was only 13 years ago. A place where thousands of people were killed just so recently is now a place you need to buy tickets to, in order to see how tragic the event was. And the times haven’t exactly changed yet, as Adam Gopnik noted in his story Stones and Bones for The New Yorker Magazine, with a heavily secured entrance where kids are stopped from playing around the memorial fountains and park. Gopnik writes: “The idea that we celebrate the renewal of our freedom by deploying uniformed guards to prevent children from playing in an outdoor park is not just bizarre in itself but participates in a culture of fear that the rest of the city, having tested, long ago discarded.”

Still, the Memorial and Museum struck a cord with me in a way that was very different from other museums that commemorate horrific historical events. I have visited Holocaust museums around the world and I’ve walked through the Apartheid Museum in Johannesburg. All of them caused me to fall silent, contemplating the horrors of history and the evil of mankind. But none of them gave me goose bumps like the 9/11 Memorial.

I wondered why. The events of September 11th 2001 were undeniably horrific and 3000 people died, but haven’t there been more horrible events, with even more tragic deaths? Why is this one different to me? Is it just because I had stood on top of the towers two weeks before the attack? Or was there something more? 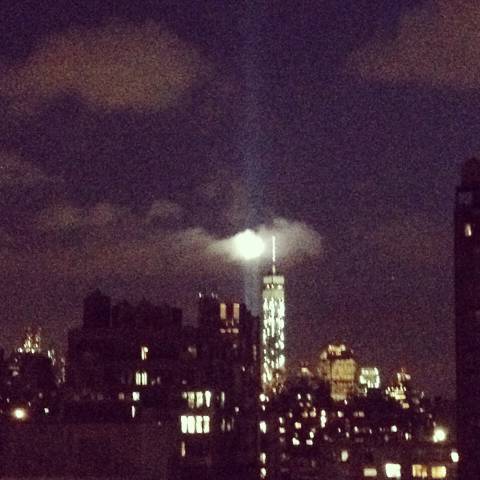 (On the evening of September 10th, two beams of light resembled the Twin Towers in the skyline)

A sit down with Prof. William McGeveran came to mind. He’s an expert on privacy and technology law in Minneapolis, Minnesota (I’ve quoted him in a previous blog too). He was talking to us about the impact of the Edward Snowden revelations on National Security Agency surveillance. He commented on how different generations view the privacy aspect of the NSA’s ability to gather all kinds of information about everyone, everywhere. He said that the 20-year-olds he teaches at the University of Minnesota have a different perspective to older people. One of the reasons, he believes, is that 9/11 happened when they were not even 10 years old. They didn’t consciously experience a change in their lives, other than the mere fact that something tragic had happened. 9/11 was so long ago in their perspectives that they couldn’t see or understand its impact on the world.

It made sense. When I was 11 the Berlin Wall fell. I know how important that moment was. I remember my parents watching tv and being happy. But it didn’t have a tangible impact on how I viewed the world. 9/11 did: it was the first time something so horrible became a part of my conscious and adult life. At the time I was becoming aware enough of the world I lived in to gradually see what the consequences were. One of them is the current debate about privacy versus security, with the NSA looking for ways to prevent another 9/11 and turning to internet surveillance and data gathering to make sure they don’t miss anything.

I wonder if there will ever be a time where we can say: 9/11 sparked a whole series of events, but times have changed now and we live in a different world where we no longer have to be scared. Where we can again stand on top of a skyscraper and just feel humbled looking out at the horizon, without being scared of what might happen. I know that’s a naïve thought. Let’s just hope that we don’t need any future memorials to mark any more milestone tragedies that shape who we are and how we live our lives.

Ps While writing this blog, a beautiful poem came to mind by Polish poet and Nobel Prize Winner Wislawa Szymborska. Read it here

Pps If you want to see more pictures, find me on Instagram: ivo_van_woerden