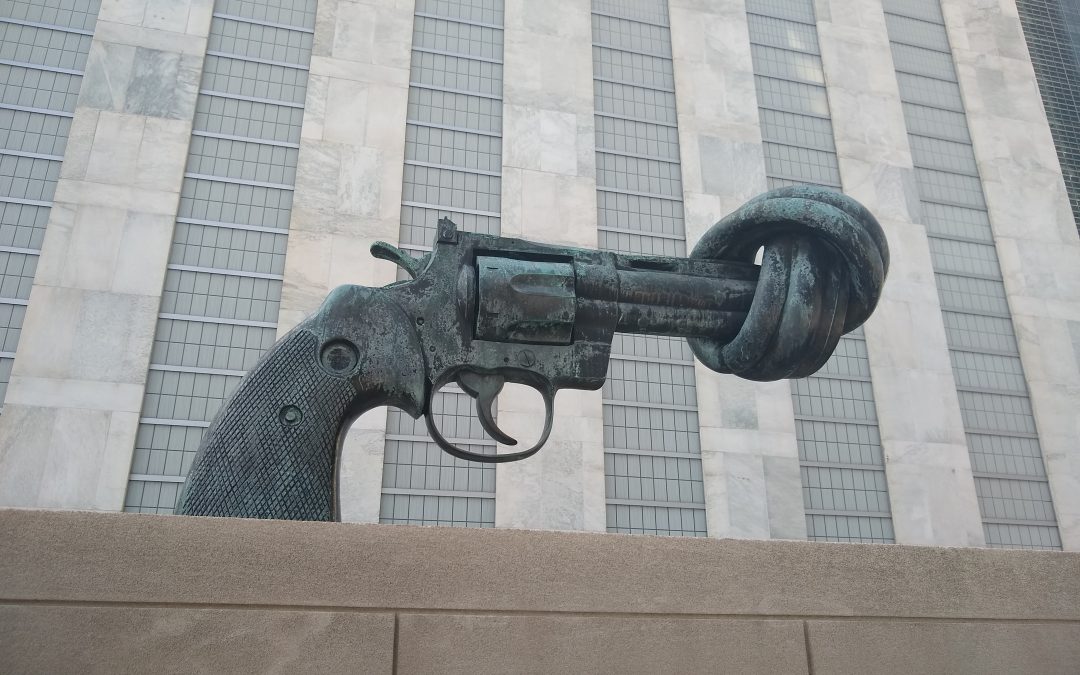 A Bloody wait for Gun Control in the United States

Death has a constant presence in a conflict zone, where a bomb, bullet or pellet can take out life at any moment. And it is no different here in the United States, at least in the minds of some citizens and visitors, as the threat of a shooter hanging out with an automatic rifle, looms.

Every public space is a potential crime scene, with passersby as potential targets of any random person, who loses belief in the established constitutional system. What makes this horrid possibility a potential reality is increasing hate in public discourse, a dysfunctional economy and easy access to sophisticated guns.

America is a weaponized society. There are more privately held guns than the population in this country. According to research from Small Arms Survey, an independent global research project based in Switzerland, conducted over the past few years in wake of a spate of mass shootings in public places, United States has 120.5 guns per 100 people in the country–https://www.reuters.com/article/us-usa-guns/americans-own-nearly-half-worlds-guns-in-civilian-hands-survey-idUSKBN1JE220

After the recent mass shooting in El Paso, Texas, where seven people were killed and 21 injured, the U.S. media outlets quoted research stating that “Americans make up less than 5% of the world’s population, yet they own roughly 45% of all the world’s privately held firearms.”

More than the threat of an external enemy – for which the country is (mostly) prepared – the United States faces a threat of potential gun violence from citizens, which it may never be fully prepared to counter. Before these public mass shootings began happening what is arguably frequently on home soil, Americans mostly only knew of deaths in foreign lands, like Vietnam, Iraq and Afghanistan, as a result of its foreign policy interventions. But now, U.S. citizens are killing their fellow U.S. residents. There is no foreign intervention here.

As the country prepares for the next presidential election in 2020, gun control figures among the top issues for Republicans and Democrats. However, Congress, under both parties, has failed to successfully take any decisive step with regard to the gun control issue.

The National Rifle Association and arms dealers seem to control the issue for their own best interests, and significantly influence policy makers. One of the leaders of Democratic Party requesting anonymity told me that “NRA buys and sells Congressmen.”

More often, politicians, scared of taking any decision on gun control and the arms lobbies cite the importance of Second Amendment of the U.S. Constitution giving citizens the right to keep and bear arms. But this argument, others say, including Mark R. Anfinson, a Minnesota lawyer who specializes in media law, is flawed.

The “founding fathers of America through the First Amendment made sure that the American government does not get too big, too powerful and too abusive,” Anfinson said. “They were not aware of what will happen in 2019. American founders created an experiment and experiments may not always work, we may have to adjust and readjust.”

I agree. The complexity of the Constitution cannot be an excuse in the US, for lawmakers to standby as their own innocent civilians are being murdered.I believe government in the US has to take steps to disarm the civilian population, rather than taking steps to counsel or deter the potential killer.

Since the 2012 Sandy Hook Elementary School shooting in Connecticut in which 20 children, six adults and the shooter were killed, there have been more than 2,200 mass shootings across the United States in which 2,502 people were killed and 9,283 people were wounded, according to various media reports published.

And in all this chaos and political unwillingness to take a stand on this issue, children in the United States suffer and prepare for the worst. These days, many schools have regular security drills and children as young as three years old have to be aware and prepared in case an active shooter barges onto the premises.

“We are prepared for unthinkable,” says Eric Mahmoud, president and founder of Seed Academy and Harvest Preparatory School in Minneapolis. “We demonstrate the situation if an active shooter happens to be in the school. We teach them how to evacuate, where hide. For this, we have designated color codes for them to remember easily.”

Links for figures quoted in the blog…