Sixty-five-year-old Mustafa Magambo Mutone surprised people in 2017 when he cried out to the government seeking support for some of his 176 children. “I have tried to feed my 13 wives and over 170 children and it is not easy. I request the government to at least sponsor 30 of my children in secondary schools and tertiary institutions,” said Mutone, a businessman and a resident of Kyaterekera trading center in Kagadi district, South Western Uganda.

He married his first wife at 16 years of age. By 2017, Magambo was worried that he would have about 180 children because six of his wives were pregnant.

“Two of my wives who gave birth to twins are in Kampala and Isingiro, working as midwives, while another two – Haniffer Kabasomi and Jane Tuhaise – work as nurses. My youngest wife is 25, and the eldest is 50, but I had about 10 girlfriends before I married officially and they all delivered the same year,” Magambo said.

The story of Magambo mirrors the situation in many homes that are grappling with huge family sizes. This is not only happening in Uganda but also in other African countries, according to the recent UN report on world population trends. Follow link: https://www.un.org/en/sections/issues-depth/population/

According to the study by the Pew Research Center, Africa is expected to lead the world in population growth by the end of the century with Nigeria, the Democratic Republic of the Congo and Tanzania topping the list. 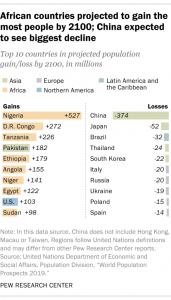 However, the effects that the projected population growth will have on African countries are uncertain, said John Wilmoth, Director of the UN Population Division. He was addressing a news conference shortly after the launch of the report. Follow link; https://www.youtube.com/watch?v=R-f95dQBFw8

While population growth is slowing in the developed world, and even shrinking in certain cases, such as in Japan, Germany and Spain, Africa’s population is steeply increasing.

“As populations increase, Africa’s developmental demands increase, piling more pressure on resources and budgets to provide living essentials and public services to a rapidly increasing number of people. With many African nations already behind on development targets, overpopulation threatens to compromise progress across the continent,” says Prof. Ragui Assaad, a policy analyst at the Humphrey School of Public Affairs at the University of Minnesota.

According to the UN study, in 1950, 10% of all children lived in Africa. That percentage doubled by 2000, and it is expected to double again by around the middle of this century.

Former U.S. diplomat Tom Hanson says the predicted population boom presents both good and bad news for Africa and the rest of the world. He was presenting a paper on the UN demographic trends to World Press Institute Fellows at the University of St. Thomas in St. Paul.

Meanwhile, the rhetoric from key members of the international community on African overpopulation is strong. Population growth is bad for Africa seems to be the message.

French President, Emmanuel Macron states that for Africa to be prosperous, a lot more should be done to slow down its galloping population growth. Macron said this during an interactive session organised by the Tony Elumelu Foundation (TEF) in Lagos, Nigeria. Follow link; https://www.youtube.com/watch?v=fA90CXAk1XU

“We have to deal with demography. I spoke about it in the past and it was a huge scandal especially in europe, but i am sorry; if you have 7-8 children per woman, even when economic growth is 5%, you will never end the fight against poverty,” Macron said.

Asked to give her opinion on Africa’s population issue, Marianne Williamson, a candidate in the U.S. Democratic presidential primaries, said, “Ignoring Africa means ignoring real risks to our security. While some African countries manage their economies well, others have poor economies and risk becoming failed states. Failing states can become grounds for terrorist groups, such as Boko Haram in northern Nigeria, for epidemics as was seen with the Ebola virus in Eastern Congo or sources of refugees seeking political asylum.”

This was during a debate organized by the Council on Foreign Relations where the Democratic candidates were invited to articulate their positions on critical foreign policy issues. Follow link; https://www.youtube.com/watch?v=vJ6MrDO0kgY

Senator Bernie Sanders, one of the Democratic candidates who participated in the debate, said the issue of Africa’s expected population boom should not be taken lightly by world leaders.

“America must create room for Africa to play a greater role in setting the global agenda or else we will repeat the colonialist-imperialist history of the 19th and 20th century that suppressed African opinions and impoverished Africa.”

He adds: “Our global institutions, like the IMF, World Bank and UN Security Council must reflect the changing global demographics and add Africa to leadership roles. We must invest in making Africa more efficient than the rest of the world in order to avoid resources wars, which are already happening.”