Black voters, a deciding factor for the presidential election? 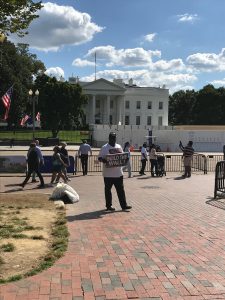 The 2020 U.S. presidential election race is likely to be a tough battle on all fronts. After four years of the Trump administration, the polarization between Democrats and Republicans is even wider and, in this context, the black vote could be a deciding factor that clinches the race for one candidate.

A month ago, a phrase written on a sign outside a Baptist church in Birmingham, Ala., showed how high emotions run: “A black vote for Trump is mental illness,” it said.

Michael Jordan, the pastor of the church, said  God had motivated him “to take a stand for what’s right,” according to articles published in media outlets. He received criticism from Trump supporters as well as those offended by his reference to mental illness.

Considering Trump’s tweets and comments often characterize people of color negatively, it’s surprising anyone from a racial minority would back him. Add to that the fact that the vast majority (80 to 90%) of black Americans historically vote for Democrats anyway.

Black Americans comprise 13% of the total population and represent the largest racial minority in the country, according to the U.S. Census.

Of the 44 million black people in the United States, 28.8 million are of voting age, according to Dr. Theodore Johnson, a senior fellow at the Brennan Center for Justice at the NYU School of Law, and an expert on black voting.

In the 2016 election, of the black people who voted 8% backed Trump and 89% supported Clinton. But many didn’t vote at all.

Many think the lack of sympathy for Hillary Clinton or the assumption that she would win anyway, led black voters to stay home. Voter suppression, among other factors, also could have contributed.

In that election, the black voter rate “declined for the first time in 20 years in a presidential election, falling to 59.6% in 2016,” according to Pew Research data. The decline is the largest on record for blacks, and contrasted with a raise in white voter turnout.

What can we expect for 2020? Johnson cites history. The community’s political choices changed since its first days, when they mainly voted for Republicans as one of them, Abraham Lincoln, abolished slavery in the 1860s. Democrats were seen as segregationists and related to the white supremacy of the Ku Klux Klan.

However, in 1948, Harry Truman became the first Democratic Party leader to win the black vote, taking a stand for Civil Rights and creating a new, strong relationship between the party and community, Johnson explains. From here, the black vote generally remained with Democrats, and likely will continue to do so into the next election.

With no alternative to the Democratic Party, African-American who don’t like that party’s candidate in any given election year “go fishing,” Johnson explains, meaning they stay away from the polls entirely.

One explanation for this behavior is the concept of “linked fate”, developed by Michael Dawson, A professor at Chicago University. It refers to a sense of belonging to an interest group, which makes the individual vote with the group.

Peter Canellos, Politico’s executive director, says: “The fact that 90% vote for the Democrats is not matched by any other ethnic group.”

Canellos adds it also depends “if they actually make it to the polls” at all, alluding to many reports of systemic obstacles leading to voter suppression, like rules about ID cards and other hurdles.

If they do manage, “they’ll be pragmatic and go for the one candidate they think can beat Trump”, Johnson concludes.