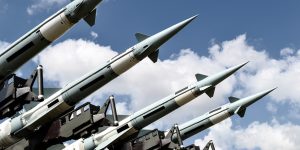 Not long ago, many people thought of hackers as men in basements, sitting in front of several screens and with green text on them, like they were depicted in the Matrix movies. They were thought of as loners, talented outcasts typing hectically on a keyboard, trying to get into someone else’s computer or device. In this narrative, these hackers were never thought of as part of or funded by a government trying to get into another nation’s private documents. But, in reality, that’s what many of them are these days.

Cybersecurity and cyberattacks are a top priority now. Ever since the Russians’ intrusion on the U.S. Pentagon’s private network in 2008, the United States created offices – and an ever-increasing budget – dedicated to these matters. The efforts of technologically powerful countries to spy on one another keeps raising the bar, including when it comes to the potential to do harm.

But where does cybersecurity meet nuclear weapons? A perfect example appeared in 2011 with the launch of a supposedly conjoined attack from the United States and Israel on Iran’s nuclear project. The Stuxnet virus was a highly sophisticated worm reportedly capable of changing the rotational speed of motors connected to centrifuge machines.

So far, it seems, frustrating the efforts of a country to build its first nuclear weapon has been the most relevant cyberattack. Logically, the next question is how far are we from cyberattacks that launch nuclear weapons?

Fortunately, we are not there yet. Specialists on the matter agree that even though hackers are targeting nuclear weapons and facilities related to them, they don’t yet have the ability to launch such weapons. But hackers can infiltrate and get confidential documents or even mess with the supply chain of raw materials and logistics, such as what happened in 2020. Several media outlets such as the New York Times and Washington Post reported that hackers with ties to the Russian government were suspected to be behind a well-coordinated attack to penetrate several federal agencies, including departments of Homeland Security, Treasury, Commerce and State.

The reason why nuclear weapons are still outside the range of hackers is because of the protocol needed in order to launch them. First, the missile command and control has no physical connection to the internet, which makes it impossible for an outsider to get into the system through virtual means. Furthermore, each country has its own set of rules for launching the operation. In the United States, the president can give the order to do so, and certain codes are required for the system to work. Those codes are kept separately and have to be delivered to the right person at the exact same time with a maximum margin of error of three seconds.

So, this is a long way of saying, we can be relieved to say that it’s not possible to launch a nuclear weapon as a cyberattack. But be aware, technology is evolving faster every day and a network is as strong as its weakest link. Which most of the time are humans.