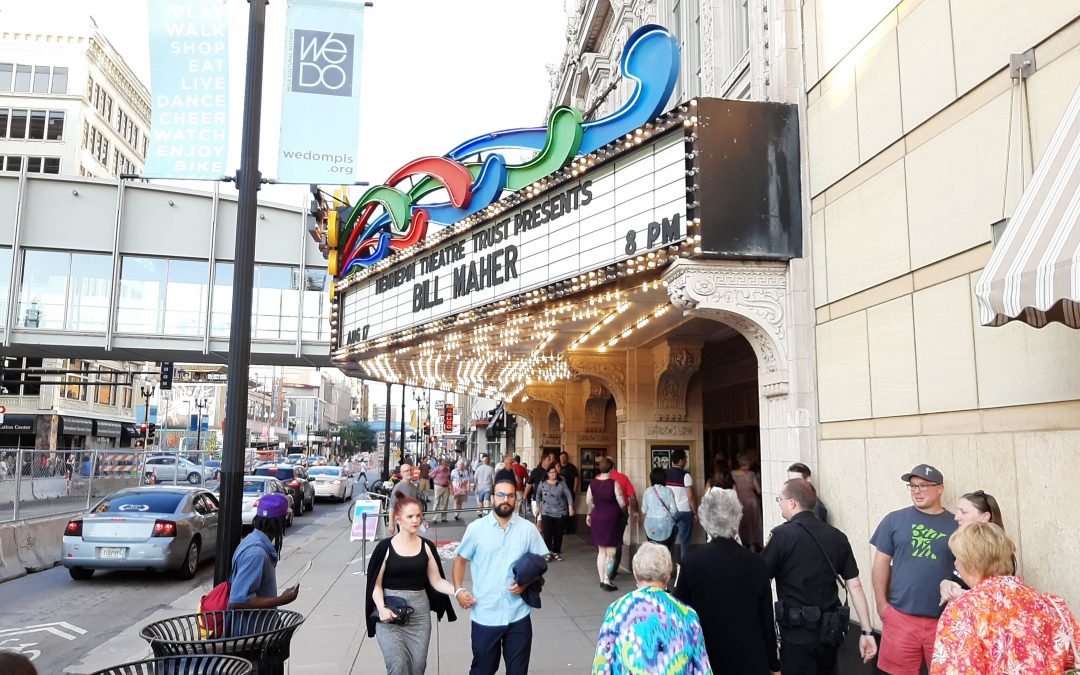 Laughing in the face of the culture wars

In my first full day as a WPI fellow in Minneapolis, I found myself in an Italian Renaissance style theatre room full of people laughing wholeheartedly at the penis size of Donald Trump.

Bill Maher, comedian and political commentator, host of the HBO show Real Time with Bill Maher, was on the stage of the State Theatre as a part of his nationwide tour. His show is very popular in the 18-49 audience, and Maher is a vocal and divisive player in the culture wars.

Maher received an over-enthusiastic standing ovation while entering the stage. Almost the entire first part of the show was dedicated to Trump, who was called every name in the book from being a liar to a traitor, not to mention his body parts, and Vladimir Putin being his “pimp”. For me, it was a bit repetitive, but for the majority of the audience, every punchline must have felt like a moment of relief from the constant political anxiety caused by Trump’s Twitter-presidency.

Of course, the Trump-bashing is the low-hanging fruit in a show like this. But Maher is not only known for his strong anti-Trump views, he’s also a vocal critic of the so-called “social justice warriors” and the increasingly progressive wing of the Democratic Party.

Maher made fun of Democrats “caring more about illegal immigrants than Americans” at the primary debates, and “fighting for trans women’s rights to abortion”. (“Good luck campaigning with that in a red state,” – Maher said). And while criticizing progressives, he praised Minnesota Senator and presidential hopeful Amy Klobuchar, who has a more centrist message. “People could vote for her”, said Maher – although she’s polling around 1% now.

So, while this might have been just a political standup with mildly provocative sex jokes and snarky comments about over-sensitive millennials, which you shouldn’t take too seriously, some of the big questions of contemporary American politics were also involved.

At the same time, the audience was having a laugh on Hennepin Avenue, Twitter was on fire along the same cultural lines.

Just a day before the show, Maher called the BDS (Boycott, Divestment and Sanctions) movement a “bullshit purity test” after the controversy involving U.S. Reps Ilhan Omar and Rashida Tlaib. The Israeli government first denied entry to the two congresswomen to Israel because they support the boycotts – and Maher is strongly against this movement. By the time the show started in Minneapolis, Tlaib tweeted, “maybe Maher’s HBO show should be boycotted.” Several prominent leftists were against Maher on this issue. Maher later replied: “But here’s the thing, the house voted 318 to 17 to condemn the #BDS movement, including 93% of Dems. Does Tlaib want to boycott 93% of her own party?”

This might be just one moment of the endless stream of Twitter drama, but it highlights a trend. There is an internal struggle inside the Democrats between the centrist and progressive voices.

Some of Maher’s criticism about the “wokeness” is justified. But it’s hard not to think about the famous line of Minnesota’s very own Bob Dylan, which is written on a huge mural just a couple blocks from the State Theatre, about the times being a-changing. Maher represents a face of the liberal media elite that used to be unquestionably dominant. But not anymore.