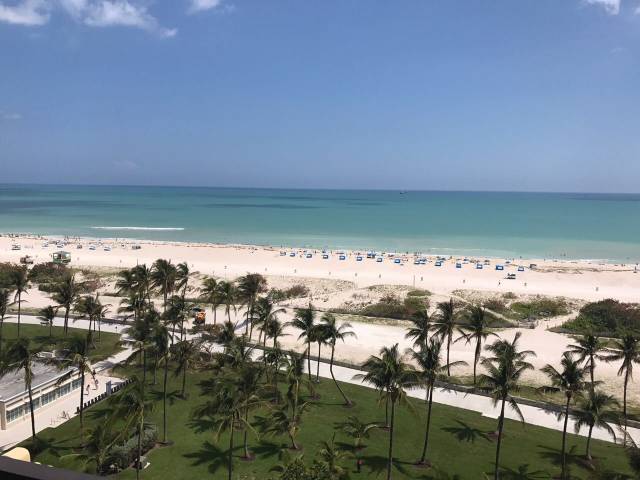 In recent years, Miami has earned itself an unsavory reputation as a haven for corrupt Latin American politicians. I reflected on this as I admired the view from the beautiful penthouse in which we stayed in Ocean Drive, Miami, and wrote about it in my creative non-fiction column for Guatemalan newspaper Soy502.

You can read the original text in Spanish by clicking on this link:

And for those of you who are not Spanish speakers here’s the translation:

Last Sunday, I woke up in a large penthouse filled with light. I loved the modern, minimalist furniture and how the white floors and walls made the rooms seem even brighter when the light seeped in through the half-open shutters, flooding the rooms. If I could design my ideal apartment, it would be exactly like this: a huge box of light.

I climbed the stairs barefoot and opened the glass door that led to the roof-deck. I felt the warm air embrace me.

There was a rectangular jacuzzi in the middle. Leaning on the railings, I spent some time admiring the view: the white sand of the beach, the palm trees gently swaying in the wind and the joggers who had got up early to do some exercise.

From the opposite side of the roof-deck you could see huge skyscrapers in the horizon, some of them still half-built. No one would have guessed that the week nefore, Miami had been hit hard by hurricane Irma, which left nine out of ten people in the city without light or water for several days.

Here, in the most exclusive part of the city, the local authorities had quickly restored those basic services, swept the streets clean and removed the fallen trees, before the owners of those beautiful apartments returned. A few days before our arrival, I had read in the press that a number of those wealthy home-owners had escaped from the hurricane in private jets, not before taking the mandatory selfie on the runway and posting it on Facebook, of course.

“So what does the owner of this place do for a living?” one of my fellow journalists had asked the night before. We were staying there for a few days as part of a journalism fellowship. “I’ve got no idea but he or she is not a journalist. That’s for sure,” I said. “He owns a private equity fund,” someone else said.

As I gazed at the huge skyscrapers, each with hundreds of windows, I wondered which of them housed the lavish apartments purchased by Guatemala’s former Minister for Energy and Mining, Erick Archila, who is wanted by Interpol on corruption charges. I wondered whether from that roof I could see Coral Gables, where disgraced Panamanian president Ricardo Martinelli, also wanted by Interpol, owns a huge mansion.

So this is the so-called “American dream”, I thought: a penthouse filled with light in an art déco style building, with a beachside view. And to afford this view, some are willing to murder, to embezzle millions of dollars and to wind up in a prison cell with an extradition order.

To do list for this weekend:
✅APPLY FOR #WPIFellowship

It's the last weekend before applications are due Saturday, October 1!

The application deadline is October 1 for our next #WPIFellowship! Will you be one of 10 journalists to embark on this once in a lifetime experience? https://worldpressinstitute.org/fellowships/ https://twitter.com/gijnPortugues/status/1567988651484643334