At a gathering in the living room of a cabin hidden in a pine forest, the fracture in Ely’s community of about 3,500 residents is hard to perceive. 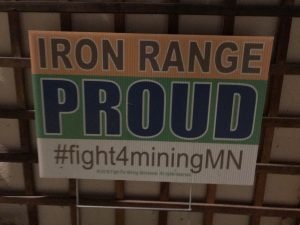 All the attendees of the potluck – from the woman who brought the pork ribs to the couple with the apple cake – saw the sign hanging next to the main door: “Iron range proud. #fight4miningMN”.

This issue of whether to mine for copper-nickel in northern Minnesota is dividing the town. Under the Obama Administration the project was threatened out of concern for conservation. Under the Trump Administration, it’s gaining new life.

The project led by Twin Metals, a subsidiary of the Chilean Anfogasta, gained momentum earlier this year as the federal government reinstated critical mineral leases for the operations in the area.

Signs supporting mining like the one at Anne Swenson’s home are seen around Ely. “It’s the old Ely versus the new Ely,” she explained, referring to those who want industry to be again as a source of jobs, and those who think mining poses a threat to the unique natural reserve.

Swenson, the publisher of the local newspaper The Ely Echo, supports the move toward mining in hopes of helping the area return to its golden age of the 1920s. Back then, Minnesota mining was an important part of the industry that made the United States the world’s preeminent producer of steel, according to the Iron Range Resources and Rehabilitation Board.

Ken Martin, chair of the local Democratic Farmer Labor Party recalled it: “The steel we made for World War 2 came out of those iron mines in Minnesota, and no doubt there are still important jobs and mining communities up there,” he said. 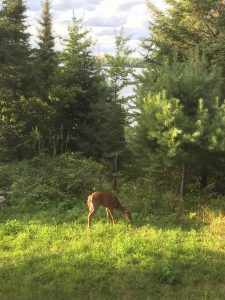 Despite strong opposition from local and foreign environmentalists, the proposal of the Chilean conglomerate to build the largest underground mine in the state’s history, as various media outlets reported, has gathered support from some of Minnesota’s politicians on both sides of the current political division in the country.

Like many Republicans, Jennifer Carnahan, chair of the Minnesota party chapter, sees the project as a potential growth booster.

“There’s a huge opportunity for our state to create a lot of new jobs, to foster the resources we have, in a less populated area where there used to be a more significant number of jobs,” she said. “This could revitalize that and strengthen the communities and opportunities.”

Within the Democratic Party, this is a “very explosive issue,” Martin said. “We have people on both sides, with very valid arguments. Labor unions who really want those jobs, and environmentalists saying we can’t risk polluting our environment We believe we can do both create jobs and do mining responsibly in a way that doesn’t pollute the environment.”

Some prefer not to take a stand on the complex issue, like Will Steger, an artic explorer deeply committed to sustainability. Steger runs educational programs and advocates for changes in climate change control at The Steger Wilderness Center in Ely.

“There’s good people on both sides,” he said. “For some, mining means their children won’t be forced to leave.”

A recent column in the StarTribune by Paul and Susan Schurke, two of Ely’s residents against the mining project, push back on the alleged number of jobs the project will create, citing the increased use of automation and robotization in the mining industry, which means fewer jobs for humans.

Mike Frazier, who lives part of the year in a cabin outside of Ely, fears the deer jumping freely in his backyard, foxes hiding in the woods, and bears he sees from time to time will be no longer protected.

“It’s not old vs new Ely,” he said. “It appears to be Ely against the world.”