Peace and love, lost in time? 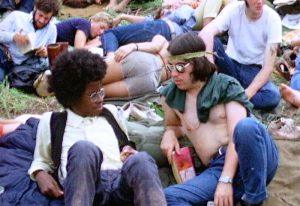 By Derek Redmond and Paul Campbell – Own work, CC BY-SA 3.0

Bethel, N.Y., 1969. A crowd of youth gathered at a muddy farm to spread a catchy message: “Peace and love.” From August 15 and for three days 50 years ago, good vibes filled the air, while many were fighting in Vietnam. The unexpectedly huge Woodstock festival became an icon of the counterculture and its ideals of freedom and harmony.

The half century anniversary of the rock event was on the front pages of newspapers the day I arrived in the United States. A headline asked: “Are the good vibes gone?”

Beyond the cancellation of events in New York and Maryland to commemorate the “hippie” summit, other recent anniversaries in the country are much less celebrated – and help answer the question posed by the headline. August 12 also marked the two-year anniversary of the murder of Heather Heye, 32, at a white nationalist rally in Charlottesville, Va. The man who rammed his car into anti-racism protesters, killing her, was sentenced to life imprisonment in June.

It appears good vibes are gone.

At the beginning of the month, Americans saw a new mass shooting, this time in El Paso, Texas, where 22 people, including eight Mexican nationals, died at the hands of another white supremacist. Shortly after, the gunman opened fire in the supermarket, an anti-immigrant manifesto speaking about the “Hispanic invasion of Texas” appeared online.

After El Paso, and even before, many in this land largely made up of immigrants have lived in fear of being potential targets. As a Puerto Rican resident of Florida told USA Today: “The Latino community is always thinking, ‘Is this the day we’re going to have a maniac come into a store and shoot you because you’re black or Hispanic?”. Throughout the news media and social feeds, multiple voices repeated the sentiment.

Like those predicting the tragedy, Rosa Ramírez said she had an “ugly premonition” when her son, Óscar, 25, left El Salvador with his wife Tania and their two-year-old daughter Angie, looking for more opportunity in the United States, as widely reported throughout the news media. For them, U.S. white supremacists probably seemed less dangerous than the poverty and gang violence they faced in their home country.

The next time Rosa saw Óscar and Angie, their two bodies were lying face down, floating on the river bank. After two months waiting for a response to their request for asylum, the family tried to enter the United States illegally. Tania witnessed from the Mexican side when her husband and daughter drowned in the river.

The silent image screamed both the tragedy of one Salvadorian family and of thousands who have been trying to reach U.S. soil from Central American countries, where crime rates are among the highest in the world.

Like the image of a Kurdish boy’s body lying in the Mediterranean coast illustrated the crisis of Syrian immigrants in Europe in 2015, the photo of the Salvadorans has shaken the world with the crude reality of what is happening at the U.S. border.

“Immigration policies are tougher than ever before. Trump wants to dissuade immigrants from coming, but the price in doing so is causing huge damage,” said Tom Hanson, a former U.S. Foreign Service Officer.

While a physical wall is under construction along the south border, other symbolic barriers are built on extremist ideas.

Are good vibes gone? Many times they might seem to be. But hope is never lost.