Squeezing the steel symbol of Texas between her legs 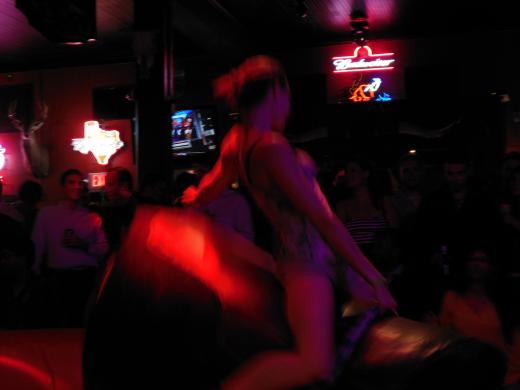 Thick cloud of mild perfumes, scent of tobacco leaves and sweat covers the tremor of the blues and jazz maestros in the South. The Lone star casts silver shine over a hormonal pandemonium in the humid Texas evening. Tonight is the high point of the mating season.

A single conversation manages to leap across the alcoholic symphony of loud female laughter and deep male roar.

“Just show them your titties! They will love you!”

I’m not sure if the combination of exhaustion, sensation of everlasting summer and couple of beers is the inevitable way to a bar full of giglets, fiercely riding a mechanical bull. This at least was my case couple of nights ago. And I honestly would not like to think that there was anything common about it.

The next paragraphs will be an attempt to highlight the differences between an American and a European girl when riding 850 lbs (almost 400 kg) mechanical bull at an old-school bar in downtown Austin. There would not be any claim for a representative nature of the following lines. I was simply too dazzled by the sight and the feeling of exclusivity. 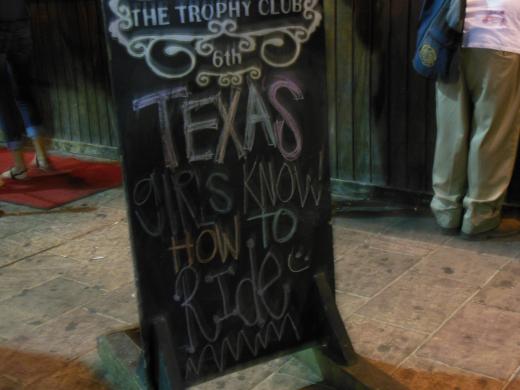 She is a natural performer. The steel cattle and the PVC ranch fence are hers stage and scenery. There she is – playing her dance of seduction and lust. A juicy fruit, fallen down from the Garden of Eden, stricken by a naughty “All Stars team” of guardian angels. She casts her long, blond hair back with her eyes half closed like a tempting, infernal dervish. And when she moves her hips in a seductive rhythm, she sets the hastening pace of all men’s’ hearts. There she is – posing, licking her pink-colored lips, while gently touching the bared neck. Following the rhythmical movement of the steel animal beneath her, she shivers her sunburned body like a prehistoric reptile – crawling into the most obscure and hidden corners of men’s sub consciousness. Nobody in the room winks with his eyes as he doesn’t want to miss the brief moment, in which the tiny boundary between what is simply enjoyable and the seriousness of the oldest human drive will be crossed.

Her full, low bosom and naked waist turn the ride into a notorious spectacle.

As her mighty hips squeeze the mechanical substitute, her curvy shapes deliver silent promises. It is obvious – she enjoys posing for the cameras and the watery eyes behind them as much as she enjoys generating disheveled and indecent thoughts.

She is a tiny dancer, a dragonfly alighted on the steel made symbol of Texas (please don’t compare it with Hemingway’s “The butterfly and the tank”. And yet – dragonflies are predators). She joyfully flits over her own true American dream. She is a graceful roe, jumping over the board fence of the local boys’ imagination, frightened by the stink of cattle-shed, cheap alcohol and cheap metaphors. She is a “no man’s land”. She does not ride for those, who are present. All her men as well as her demons are carefully hidden far away in her past, in her dreams and longings, secretly pent behind the heavy bars of thousands of miles of roads.  But don’t get me wrong – she is not looking for redemption, simply because she loves them all.

This ride is a borrowed time from her sober tomorrow.  And as she looks at you trough the smog under her foggy eyelids, she could easily dig new craters in your shattered heart.

Even though she swings on the saddle as a fragile porcelain doll, she is an ace tightrope-walker who could easily walk on your nerves with blinded eyes.

Delicate and lithe, she is a rainbow in a gloomy dungeon. 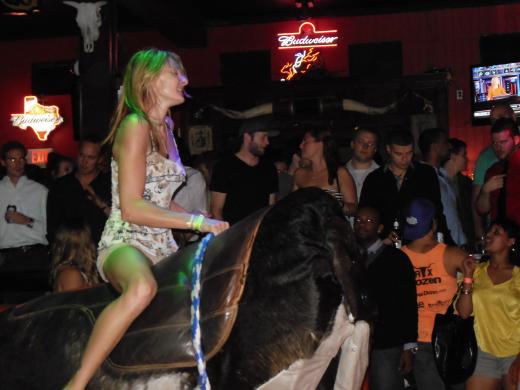 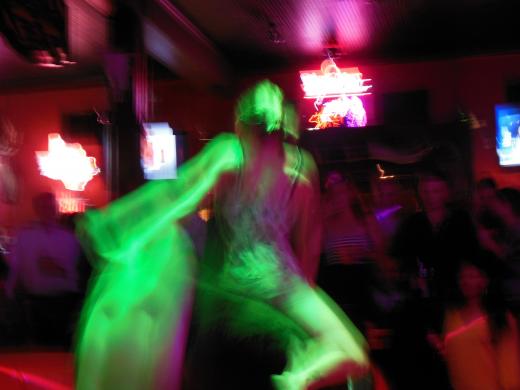 She is the Friday night queen. Her sun kissed skin inspires you to extinguish a small tribe in a remote foreign country, to become NASCAR racer, firefighter or a Hollywood actor.

She loves quiet Saturday mornings. Her skin is like a sheer curtain – one could see her veins – sad highways to the Promised Land. You could almost feel her bending in your hands, indocile and tense as guitar’s first string – the one that gives the tenderest shades of the melody, but the most hysterical ones as well.

I guess that there are many differences between the American and the European girls while riding a mechanical bull in the heart of the American Central South. But what is common between them? There is one lovely American word – “nevergirl”. I guess they are both my Texas “nevergirls”. And you don’t want to mess with Texas. Neither with my memories of it. 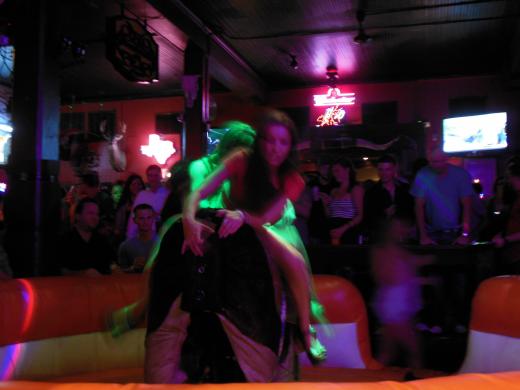 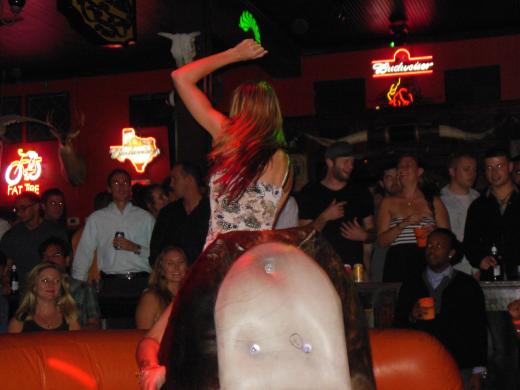