by Pauliina Grym | May 18, 2022 | Journalism, Privacy, Social Media in Politics and Journalism | 0 comments 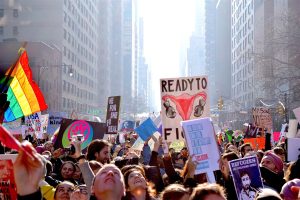 Women’s reproductive rights have been discussed all across the nation since Politico published an initial draft indicating that the U.S. Supreme Court intends to strike down Roe v. Wade.

The 1973 landmark decision that established a constitutional right to abortion for American women is likely to go. According to CNN, if Roe v. Wade were overturned, 16 states plus Washington, D.C., have laws that protect abortion access without Roe v. Wade.

Earlier I discussed the consequences of overturning Roe v. Wade with David Greising, the president and chief executive of the Better Government Association who I met in Chicago in one of our World Press Institute meetings.

All the media jumped on the Supreme Court leak immediately. This made me wonder, scrolling from a headline to another online, what kind of a role has the media played in the USA when it comes to women’s rights?

Outside of our official WPI program, I was lucky enough to meet a gentleman called Rick Pearson in the legendary journalist hang-out spot, Billy Goat Tavern in Chicago. Pearson has been the Chicago Tribune’s chief political reporter since 1998. Before that, he worked as the newspaper’s state legislative correspondent for a decade. He was kind enough to share his thoughts on the media’s role in women’s rights.

“I would say that when it comes to most of our rights movements, the media has been behind the curve — in part because of its historic white male dominance. Certainly, much of the media was slow to embrace civil rights for African Americans until the horrible injustices of protests in the South were brought to light along with the racism of regional leaders,” wrote Pearson to me after we met.

“Initially a ‘feminist movement,’ the media did promote the battle for women’s rights and equity with men as more women went to college and entered the workforce — and became an economic force.”

This isn’t really a nice thought. A woman gets a voice when she’s got capital? Then again, it does make sense. When you earn, you might feel that also earns respect — including in the law, too. And you will be included because you start to matter.

Back to the media and its role.

“It could even be argued the media played a key role back in 1973, when it aired The Battle of the Sexes between Billie Jean King and Bobby Riggs that was watched by 50 million Americans and as many as 90 million people worldwide,” Pearson recalls. “Such events, outside the normal realm of politics, often become a catalyst for change. But change remains an evolving and elusive process.”

What next to fall, gay rights?

The Supreme Court’s draft reversal of Roe v. Wade is likely to be a driver in the upcoming political midterms, especially for Democrats and women”, Pearson says.

“With a conservative Supreme Court, talk of Roe being overturned has always seemed like talk — and that a precedent couldn’t truly be wiped out after 50 years,” he adds. “But now the talk is real.”

He continues: “This potential ruling, coupled with Republican-led states that have moved to restrict abortion and gay rights, has served as a national warning, particularly to women. Facing inflation and rising gas and food prices, the headwinds had been against the Democrats with a likely GOP takeover of the House at the very least. The economy and inflation and pocketbook issues are of a major concern, but human rights can be a powerful tool to motivate voters.”

Wait. Gay rights are next? This kind of makes sense if we want to tune down the liberal way of life for Americans. If Roe Falls, Is Same-Sex Marriage Next? asked The New York Times May 8, 2022.

And NYT wasn’t alone. Liberal media and many LGBTQ+ movements raised concerns about the growing conservative power in legislation.

Then again, in the podcast Honestly with Bari Weiss, a known pro-life liberal Akhil Reed Amar, the Sterling Professor of Law and Political Science at Yale University, told Weiss he sees no threat to access to contraception or taking back gay rights (May 11, 2022). Maybe this is more of a Twitter panic, he suggests.

So, Amar isn’t too worried the regression will spill over, but the future predictions and calculations are at the same time scary and juicy. And we journalists are having a field day with pro-choice and pro-birth rallies.

Enthusiastic people, some even dressed in Handmaid’s Tale costumes iconized by the HBO series based on Margaret Atwood’s book, or pink “pussy” hats, sure make good photos, as do the stern anti-choicers holding up crosses and banners with toy babies and fetuses. ( (I just learned anti-choicers is a new American term for pro-lifers). Hell, if I wasn’t on the move every Saturday from airport to airport, I would be taking photos of these people shouting out their beliefs.

But today, all of this pretty much comes down to the bipartisan United States. One of my favorite Americans, comedian and political commentator Bill Maher pointed out in his talk show Real Time on May 6 that back in the day abortion didn’t use to be a partisan issue.

“It became a partisan issue because of the Christian right. They made it a partisan issue, they made it so that Democrats were for abortion being safe and legal and the Republicans, too – when their mistresses became pregnant of course,” the outspoken atheist said, smirking.

Abortion became a political and partisan issue during Ronald Reagan’s presidency. In the 1970’s Roe v Wade activated the Christians who had not been not so interested, or involved with politics before. Republicans benefitted from this a great deal, said Sabrina Tavernise on The Daily podcast.

Today, social media plays a part in all of this discussion, too. There we share the news, especially the ones with the most striking headlines and impressive photos. We do show our colours online — back in 1973 only on the streets and interpersonal discussions.