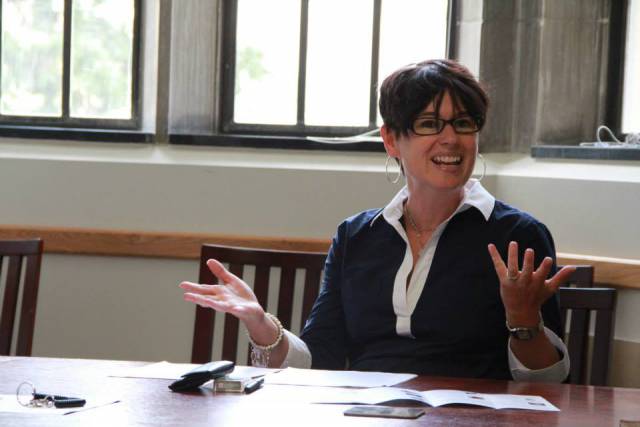 The dispute over the ethics of journalism: Put the public interest first!

Wendy Wyatt, Chair to Communications & Journalism Dpt. In STU (photo: Elina Lappalainen)
Ethics in journalism work is always a stormy debate. So it’s no wonder that the same thing happened today at the end of our Journalism seminar.
The views on ethics in media are always very individual and depend on the personal moral values of the authors. Therefore I was not surprised that only 25% of the journalists in the United States have signed the Code of Ethics of the American society of professional journalists (according to Wendy Wyatt, Chair to Communications & Journalism Dpt. In STU).
Unfortunately, in today’s discussion on the topic “Doing Ethics: Cases and Controversies” there was not enough time for debate on the second proposed article: “Intruding on Others’ Misfortune: When is it Warranted?” (Arthur S. Brisbaneq The NYT, January 31, 2012).
Thus, several important questions remain away from the discussion. They could be formulated as follows:
– Is it ethical to disguise horrible facts of the biography of a victim of sexual violence if it will prevent others from a similar fate?
– In which case, under what conditions and for what purpose facts from the privacy of the victims may be disclosed?
Just a few days before I left for the United States for participating in this year’s WPI program I completed my work on an investigation into the trafficking of Bulgarian women for sexual exploitation in Western Europe. The results were extremely harsh!
According to the European Commission, 62% of victims of human trafficking in Bulgaria are forced to perform sexual services.
The number of alleged victims of human trafficking in Bulgaria has grown steadily. While in 2008 they were 250 in 2010 they are already 432, about 10% of whom are minors.
Most often victims of human trafficking are women forced to work as prostitutes or to sell their children.
Regardless of it’s social importance, however, this theme is an implicit taboo for most Bulgarian media. The explanation for this behavior is always the same – respect upon the integrity of the victim’s privacy.
What I did was just the opposite:
In a series of articles I published the personal stories of some of these women. This happened of course after their personal permission, and subject to any conditions which they had to the contents of the texts.
The reaction of the readers was turbulent and diverse. According to some of them these articles were “offensive to the victims themselves.” According to others – important for preventing future similar cases.
As a journalist I stand awithout any doubt behind the second opinion. Moreover, it is fully consistent with the following text of “The Code of Ethics of the Bulgarian Media”. Here’s what it says:
“- Violation of the terms of this Code may be justified only if it is clearly demonstrated that it was in the public interest
– For the purposes of this Code any information “in the public interest” should not be confused with information that is “interesting to the public”
– A publication is “in the public interest” only if:
– It protects the health, safety and security;
– Assist in the prevention and detection of serious crime and abuse of power;
– Protects the public from the danger of being seriously misled”.
Therefore, in my opinion, any debate about journalism ethics must begin and end with this – whether the publication of certain information was in the public interest.