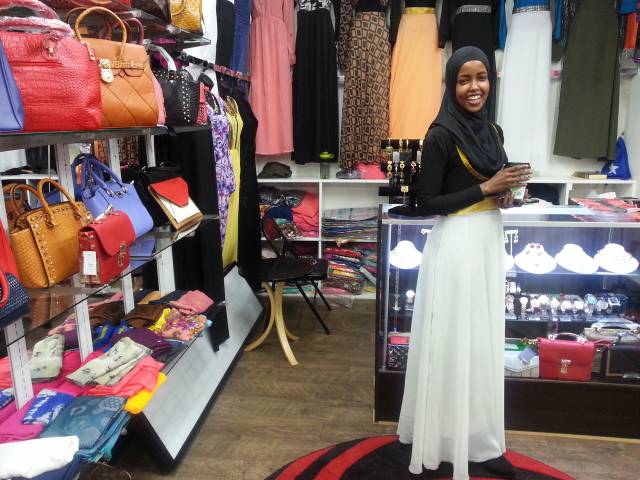 You can’t say you know a city if you don’t talk to the variety of folks who live in it. So, in the middle of the intense debate that Donald Trump brought to the table about immigrants, I told my host family Bob and Leaetta that I would like to know more about the Somali community living in Minneapolis. They did a research and found a recent Star Tribune article written by Adam Belz, about the largest Somali mall in the Twin Cities, located in Karmel Square.

Inside the Somali mall, there are restaurants, a mosque, hair salons, clothing shops, henna salons and rug shops. It feels like a piece of Mogadishu in the heart of Minneapolis. And this was the place we decided to be on Saturday, 5th September.

On the third floor, close to the mosque, I met Yvra, a 25-year-old woman with beautiful radiant skin and an astonishing smile. She was born in Mogadishu, but she has been living in Minneapolis for eight years.

“The first two years of being here I got homesick. I wanted to go back to Somalia”, she said. Very understandable, considering that her parents don’t live here and six siblings are still in Mogadishu. They couldn’t come with her.

Although Yvra was born in Mogadishu, her family moved to the countryside to escape the violence in Somalia’s capital. However, it was in vain because the fights between warlords became unsustainable everywhere, and after a couple of years, they decided to go back to Mogadishu.

With the help of the UNCHR, the United Nations Refugee Agency in Nairobi, Kenya, Yvra and her sister got the opportunity to travel to the United States with a refugee status.

“My parents want to come here too, that’s why I started a process for them to come here, but it takes a long time. My process is still going. I know it can last forever.”

When she gets homesick, social media is her best ally. “I do cry a lot when I talk to them.”

Yvra has a newly clothing shop in the area with other friends, but has bigger dreams. “I am going to graduate to get my bachelor’s degree in healthcare management next semester. I want to help people because I was helped. I want to give it back”, she said.

Yvra is just one of the 25,000 Somalis living in Minnesota. It is the largest Somali population in the United States. Many of them arrived after the start of the Civil War. In 1991, the president Siad Barre was overthrown by opposing clans, and the country stayed without a formal government for more than two decades causing a frightening power vacuum. Drought, famine, piracy and continuous fighting between clans and warlords caused a terrible humanitarian crisis. Millions of people fled to refugee camps, many of them located in Kenya.

Dadaab, in the north of Kenya, is the largest refugee camp in the world with 60,000 people living there. Medecins Sans Frontieres (MSF) has been working in the area for many years, and they have a lot of videos . If you are interested in knowing how those people live, just check MSF You Tube videos. 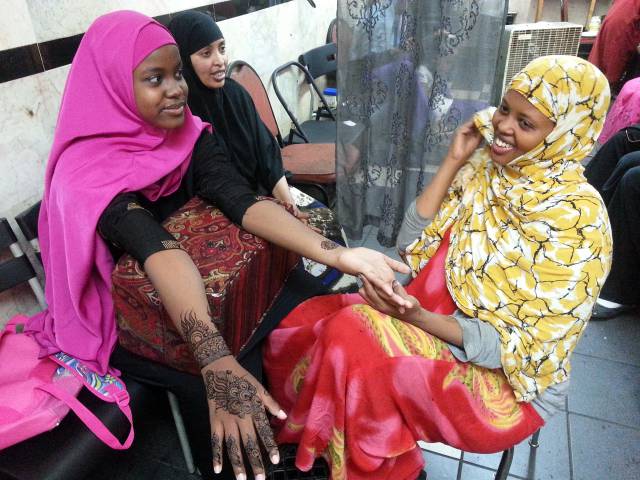 Strolling around the aisles of the Somali Shopping Mall I found another group of young Somali girls preparing for a graduation party with beautiful henna tattoos at Sihaam Henna Salon. The boys, as always, were quiet impatient waiting for the girls to get ready. This is universal, isn’t it?

A little bit further, in a neighbor clothing shop, I met Sofia, a high school student who was born in Adis Abeba, Ethiopia. She is 17 years old and has been living in Minneapolis for three years. Her father was the first to come to the city looking for better opportunities. When he got a job, Sofia and her mother decided to join him. However, the family is not complete. Sofia’s brother is still in Adis Abeba.

“The biggest challenge here in Minneapolis is the weather. It is too cold in the winter”, she said. “I miss my country a lot.”

Sofia wants to go to college and dedicate her life to social work, helping others. Just like Yvra, the Somali young woman.

The day ended with a taste of Somali cuisine: rice, noodles and all types of meat. 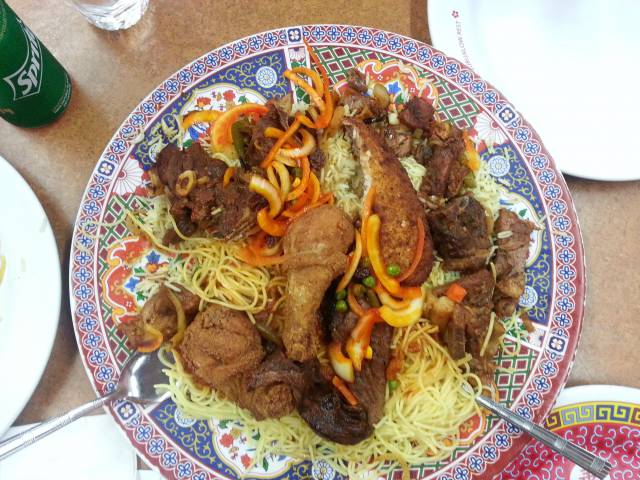