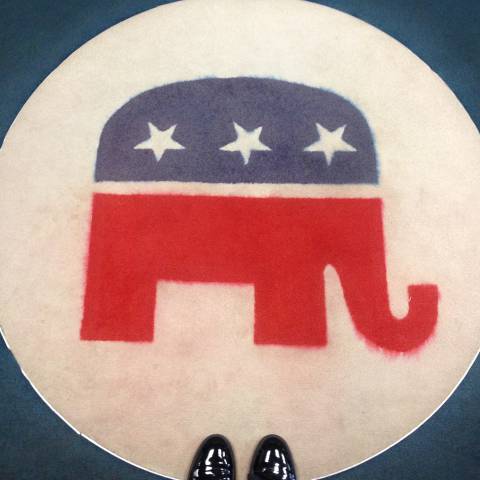 To love or to hate… Donald Trump

The WPI program started almost one month ago. In these days, the most repeated thing is that this 2016 presidential election is unusual, the most weird election in the recent years of the United States.

That idea has been repeated by citizens on the streets, academics, journalist, or politicians (democrats or republicans).

The Pew Research Center said that 70% of the US citizens is following this presidential campaign, the higher percentage since they have records. The Pew also said that the amount of people interested in this process grew up as Donald Trump moved on in the presidential race as Republican Party nominee.

United States is surprised with the nomination of Donald Trump. When he announced his intentions to be candidate only 7% of the people thought he was serious or that it was possible to achieve.

As a Mexican, this presidential election is very important and I really want to understand it. During the visit of Trump to Mexico someone in a newsroom asked me why our president allowed the republican nominee humiliate him. The surprises, consequences of that visit, stills go on.

I’ve heard a lot about Trump and here are some ideas and phrases that I’ve collected about him and the presidential election from different people. As I said before, they belong to citizens, journalists, politicians, and academics, but I prefer not to say which one belongs to whom. This is just a picture of the ideas that I’ve heard in US in the last days:

-Trump is a narcissist trying to be president, but not really interested in actually be one.

-Trump is the most unprepared candidate that US have had / The worst candidate in history of US.

-Trump has no knowledge to be in charge of the foreign policy of this country.

-Trump is the candidate to fight with the fears of all people in America.

-The main issue is not that he (Trump) is talking against groups that are actually part of US, but with one speech he is finishing with years of diplomatic work with other countries.

-This presidential election is anti-establishment, but Hillary Clinton represents all the opposite to that.

-Hillary Clinton is the most prepared presidential candidate in many years, but people don’t trust her and she can lose.

-Hillary Clinton lies and Donald Trump tells the truth that many americans need to hear but are afraid to do.

-I’ll vote for Donald Trump because I’ll never vote for a Clinton. He is not the best candidate, but now he is our candidate.

-We need to recover ourselves as american citizens.

-Donald Trump is a jerk but between the two options we have, is the best one.

-People don’t trust institutions. That’s why they are choosing to follow Trump.

-After the primaries and the race to have a nominee (in the Republican Party) Hillary Clinton is the common unifier (to fight against).

-Trump won the nomination because he is an entertainment figure.

-Hillary Clinton never shows passion, she doesn’t conquer anyone during a speech. You’ll never see tears if she is talking trying to inspire someone.

-What happened in Mexico was a shame for our country (US).

-Trump has united the democrats more than ever before.

-This country is scared by his future, not only for the possibility of Trump to be president also because we see that in US exists a lot of people supporting someone like him.

-Trump is trying to divide this country and to destroy our diversity.

-Every demographic sector is enthusiastic with Trump because for the first time they are seeing opportunities in their future.

-Donald Trump doesn’t represent all the republicans. The party would need to change after this election.

-This presidential election is also a threat for United States. We are seeing how racists is this country and I don’t know how fast we can recover.

-Hillary Clinton is not charming and not trustable. She can lose for that. She is not Obama and she is not Bill Clinton.

-Donald Trump can win this election, he can be the next president of United States even when many people (and media) still believe that’s impossible.

Now, what do you think about this presidential election? I’m just more confused, just as many Americans seem to be.