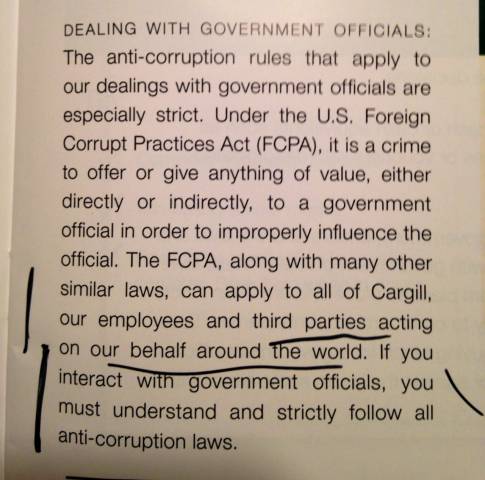 So came as a surprise that the company — while welcoming WPI fellows with open arms this week — chose not to embrace any discussion of earnings in its financial segment. An odd omission, given they rose considerably on year. The touted “transparency” (flagged some half a dozen-plus times) clearly came with Cargillesque caveats. (Note to corp comms chiefs: if you don’t intend to do something, don’t say you will in the first place).

I wondered how transparent Cargill would be over its view on practically implementing its 2nd of seven “Guiding Principles”: ‘conducing business with integrity’, not least because of its imminent move to ramp up its presence inside Russia and China — hardly paragons of an anti-bribery ethos.

Specifically, I asked how confident the company was that all its employees — including third parties acting on its behalf (per the U.S. Foreign Corrupt Practices Act) — were meeting their ongoing obligations. This is a live issue for Australian big business given the world’s largest mining company — Rio Tinto — is based Down Under — alongside rival BHP Billiton — both of whom have grappled with the long reach of the FCPA across their operations (http://www.fcpablog.com/blog/tag/bhp).

The question was shut down with a perfunctory “we audit everyone” riposte. No mea culpa over past experiences (http://online.wsj.com/article/0,,SB108533392615018797,00.html).  The all-embracing-but-non-specific-avoidance-technique coming from a man who stood up and proudly announced he’d worked at the top of the corporate communications tree for five behemoths before taking the equivalent top job at Cargill.  And you wonder why main street is cynical about Wall St (including those that could be but choose not to list) given those who seek the truth continue to only be told what suits.  Call it transparency with strings attached.