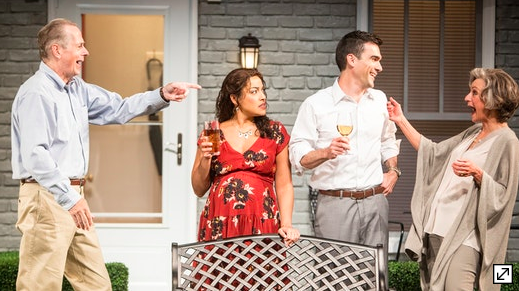 “Native Gardens” is a witty comedy by Karen Zacarías, currently showing at the Guthrie Theater. The well-to-do Butleys, with their manicured lawn and beautiful azaleas, scoff at their new next-door neighbors’ unkempt garden. The new arrivals are Pablo del Valle, a Chilean lawyer who’s striving to impress the prestigious firm he’s just joined, and his heavily pregnant wife Tania, from New Mexico, who’s completing her anthropology dissertation and is a firm believer in organic, pesticide-free gardening.

What begins as a politely pleasant relationship quickly sours when Pablo and Tania discover that the property they’ve just bought is larger than they initially thought and that part of the Butleys’ immaculate lawn is actually theirs. With Pablo’s colleagues due to arrive in five days for a housewarming barbecue (what better way than to prove their middle-class American credentials than to host a splendid barbecue, right?), the young couple is eager to spruce up their back yard and replace the unsightly metal fence between the two properties with a new wooden one that marks the correct boundary. Since this means destroying Mr Butley’s precious flowerbeds just days ahead of a gardening competition that he’s been striving to win every year, Frank and Virginia see their neighbors’ intentions as a declaration of war.

The feud that erupts between the two couples leads to a series of hilarious exchanges that touch on a number of contemporary issues, such as race, immigration and identity. Tania has to explain to the Butleys that her family has lived in the United States for several generations and that describing herself as “Mexican American” seems as preposterous as Frank describing himself as “English American”.

Spoiler Alert: Stop reading now if you intend to see play. The fence, of course, could be regarded as a metaphor for Mexico reclaiming Texas, New Mexico and the Californias, or a metaphor for Trump’s wall. And then there’s the scene in which Tania passionately argues in favor of planting native plant species as opposed to Frank’s azaleas and roses, to which Frank retorts: “Are you attacking my plants because they’re immigrants?”

I left the Guthrie Theater on Thursday night reflecting on how comedy can get people thinking about topics that are so important in today’s America and that we’ve discussed in many of our meetings with academics and policy experts, such as Executive Director of the Immigrant Law Center of Minnesota John Keller, who explained how the Trump administration has brought to surface deep divisions within American society.

As in all good comedies, in “Native Gardens”, all’s well that ends well, as Tania suddenly goes into labor and the two couples bury the hatchet and manage to compromise: the Del Valles agree not to destroy their neighbors’ precious flowerbeds and the Butleys plant a “hybrid garden” with some native plants that allows Frank to fulfill his dream of winning the gardening competition. Unfortunately, in real life, policy experts are far less optimistic about the outcome of the Trump administration and shudder to think what new horrors the president’s new twitter-storm might unleash.