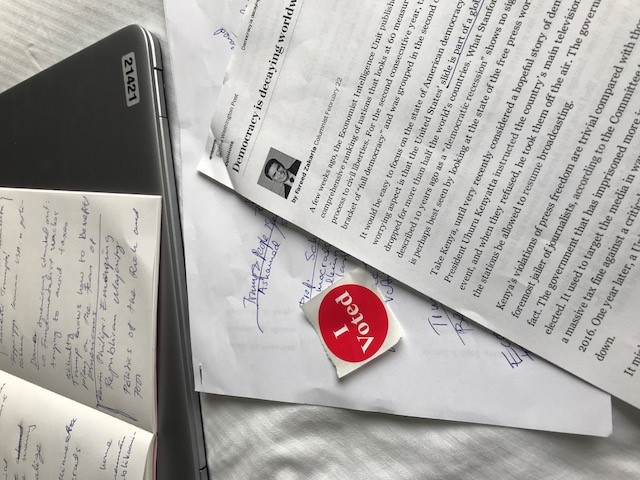 Wake up, time to vote!

Only a week in Minnesota and I had already lost count of how many conversations I’d had where the locals were expressing their distress, sometimes even shame, over the Trump presidency. How could this happen and will it get worse? It almost seems the United States has entered a time of total political unpredictability.

I had a chance to hear political writer J. Patrick Coolican from The Star Tribune, Senior Fellow Dane Smith from Growth and Justice and professor David Schultz from Hamline University discuss some of the reasons why Trump got elected. This shed a lot of light on the question and actually made it easier to understand the current political situation in the United States. Much of it also rings true in my home country Finland.

One of the key reasons for Trump’s victory is that on election day in November 2016 many Democrat voters stayed home. Hillary Clintons campaign didn’t inspire them and in many of the so called swing states Clinton didn’t do any last minute visits before the election. Trump on the other hand did.

But as professor Schultz put it: “The real news is turnout.” In many developed democracies people are getting lazier and lazier at voting. This is bad news for everybody. In Finland we call the people who don’t vote the ‘Sleepers Party’. In many cases the ‘Sleepers’ decide who gets elected. To some degree ‘Sleepers’ were the ones that chose Donald Trump.

The world is facing huge challenges as digitalization and environmental change are shaping our world into new order. We don’t have the luxury of opting out. We must start having heated conversations on the big issues: economic and social inequality and the nearing environmental catastrophe.

We must put politics back on our own agenda and get interested in the big issues. And every voter should use their right and vote.