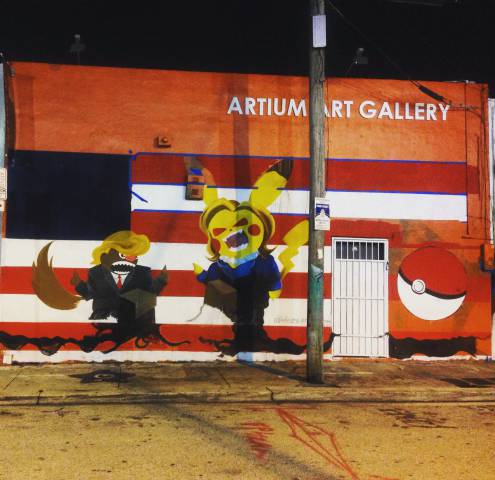 Where are you Hillary?

Imagine Donald Trump sitting in the Situation Room making life or death decisions on behalf of the United States.

Our veterans and their families deserve a president who doesn’t disrespect and disparage their sacrifices.

Not one living president has said they believe Donald Trump has what it takes to be Commander-in-Chief.

Donald’s advisers had the temerity to say he’s doing the country a service by pushing these lies. No, he isn’t.

Those were Hillary Clinton’s phrases and statements during the last week.

I looked over the past weeks and I found the same: Donald Trump.

It’s a fact that the Trump show (he is an entertainment man) is what calls people and media attention the most, here in US and in the world. But if sometimes we only see him and lose Hillary from the radar, it’s also because her campaign is only focused on him and not herself.

In New York we had the opportunity to visit the Clinton’s Headquarters. The conversation was off the record so I can’t give details, but what I can say is that I heard the same I read in the media each day: everything is about Trump. It’s not easy to listen a speech from Hillary that is not focused on Trump.

My feeling is that her campaign is focused on explaining why people shouldn’t vote for Trump. It’s strongest arguments are not to emphasize why people should vote for her because she is a good candidate, well prepared, or has a great government plan, but they just try to reflect Trump is a worse candidate.

If people say that she is not charismatic or trustworthy, she’ll say something like “well, but Trump has even less charisma or has been saying more lies”.

With that strategy, is she being close to people? I don’t think so.

What I see is that she is lost on her own speech about Trump and people just can’t follow her.

Is the Clinton strategy to encourage people to hate Donald Trump and then, because of that, don’t vote for him?

But here is a tricky thing. Does that mean that people will vote for her?

Probably Clinton is guiding some people to think that it is a bad idea to vote for Trump, but she is not convincing them to do it for her.

I spoke with a CEO of a very big company here in the US and the world (again, the terrible off the record) and he said that in a meeting with Bill Clinton and other businessmen last month, all the conversation was about Trump.

In his version, he said that at the end of the meeting some of the CEOs told Bill Clinton that the focus of the campaign is a mistake and they have to focus on encouraging people to vote, leave home and go to the vote center to make a good choice in the ballot.

I’m an observer in this election. I already spent five weeks talking with people about this race and I can’t deny sometimes I just don’t see anything about Hillary. People sometimes don’t know why she is or isn’t a good candidate, as they don’t know much about her.

In the other hand, the Trump track is everywhere either in a bad or in a good sense. There’s people that hate him and there are those who are really convinced that he is the best option to make America great again! :\

The election is in November 8th.

Experts say that we still have to see the “October surprise”. Those things that happen in the last part of the race and can change everything.

Can part of the surprise be a different strategy from team Clinton? A key thrust against Trump? Or just a fully disappearance of the stage?