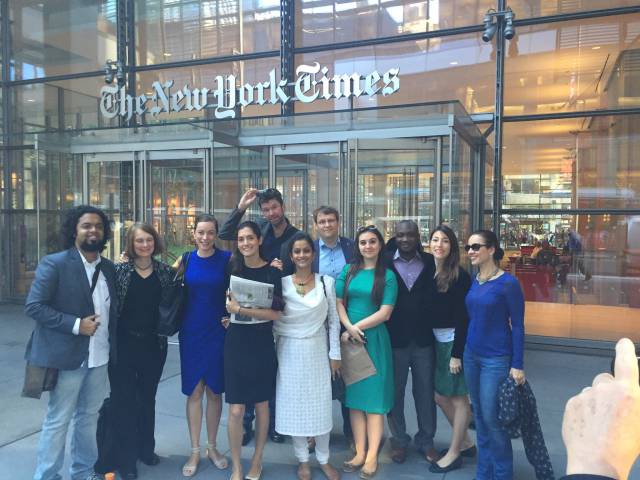 What I’ve learnt so far…

It’s happening, or has already happened, almost everywhere. During the five years I’ve been at my company we have had three rounds of redundancies. While we’ve been on this trip, two of the fellows have received news there will be layoffs at their organisation when they return home.

As we’ve toured various news outlets around the United States – from some of the biggest players in the world like the New York Times, to smaller newsrooms like the Minnesota Star Tribune – it’s clear that downsizing is the grim reality of the current media landscape. We’re all grappling with reduced budgets, fewer resources and staff layoffs.

However, in many parts of the United States savvy journalists have found an alternative model – a nonprofit media organisation. The Texas Tribune and MinnPost are perfect examples. Their advice is: find a niche, excel at it, and the audience will follow. (It also helps to have a wealthy benefactor to help you get started.)

So, while we’re all getting depressed about downsizing, there is also an opportunity to do things differently. Some news organisations are adapting and not just surviving, but thriving. Take The Atlantic magazine – it’s repositioned itself successfully. The magazine produces ten high quality print editions each year, while the website puts up 100 to 150 stories from contributors around the world each day. It’s an excellent example of expanding without destroying the brand.

Many news organisations we’ve visited on this trip are changing their work flow to deliver news in a more convenient way for consumers. Both the New York Times and CNN have identified that half of the traffic for their online content comes from mobile phones. And according to PEW research, 61 per cent of millennials get their news from Facebook. The savvy media outlets are constantly repositioning themselves to make sure they can continue to connect with audiences.

As a group of international journalists, Donald Trump has provided us with fantastic entertainment, but also a good deal of bewilderment. Is this guy for real? And is there any chance he will actually be the Republican nominee? We’ve posed these questions (and many more) to political correspondents and academics as we travel from state to state.

Trump’s endurance throughout the primaries has a left a lot of experts we’ve met scratching their heads. Many assumed he’d be the political equivalent of “summer television programming” – a tacky fad that people will only tolerate for a short period of time.

Here’s what some of the analysts have to say about his staying power:

For the past 200 years the white Anglo Saxon population in the United States has never dipped below 80 per cent. But the US is in the process of redefining itself, as the WASP population declines and the Hispanic population grows. By 2030 projections indicate that only 55 per cent of the population will be white. Donald Trump has seized on the trepidation that some segments of the electorate have about the idea that the country is changing. He’s embarked on a campaign of low end race politics by declaring a war on Mexican immigrants. His catch phrase “let’s make America great again” a not-particularly-subtle dog whistle to parts of the electorate, code for “let’s get everyone who doesn’t look like ‘us’ out of here.”

Here’s another explanation that was offered to us – he’s a reality TV star, his job is to entertain. He’s making it easy for the media, particularly 24 hour news channels, to fill air-time with his controversial shenanigans.

Police community relations has been one of the issues that has intrigued me most during this trip, as has the related issue of incarceration rates in the United States. The US has the highest rate of incarceration in the world, with more net total prisoners than China. And, around 60 per cent of the prison population are “people of colour.”

In New York we visited the John Jay Centre for Criminal Justice and the Brennan Centre for Justice. Both think tanks agreed that the War on Drugs over the past few decades has been counter-productive and the “three strikes law” in states like California have destroyed lives and communities. The poorest parts of the population are also hit hard by “criminal justice debt” – where police fine people for minor infringements. Those who can’t pay the fine may end up in prison.

Such policies have had a really harmful economic effect on some communities, and the consequences have escalated into the kind of incidents we’ve seen in Ferguson and other cities. Making matters worse, many prisons are doing little to rehabilitate and many people have trouble re-assimilating, and are back behind bars within six months of being released.

One of the issues where there appears to be a degree of bi-partisan agreement between the Democrats and Republicans is that lowering the incarceration rate is in the nation’s interest.

Career advice from the legends of the trade

Throughout this tour we’ve had access to editors of major newspapers like the Washington Post and New York Times. Encounters like this have been extraordinary once in a lifetime opportunities. But we’ve also had some wonderful insights from fellow “foot soldiers”, journalists who understand the daily realities of our work.

From a practical perspective, the most valuable advice came from Paul McEnroe, a veteran journalist with the Minnesota Star Tribune. “It doesn’t matter who you work for, or the size of your publication, you can always do good work,” Paul told our group. “A good story is a good story.” It seems obvious, but the aforementioned downsizing and restructuring we’re all going through is tough. Several of us agreed that his advice was uplifting and made us feel more positive about the future of journalism.

He also said when he looks back at the body of work he’s produced over the past 35 years he thinks, “I tried to make a difference.” I don’t think there’s a better goal to aspire to than that.

The state we spent the most time in during this trip was Minnesota. Throughout our stay everyone in our group remarked on how Minnesota was full of friendly and incredibly hospitable people. But I was intrigued by the concept of “Minnesota nice”, which was sometimes said tongue in cheek. My research revealed that “Minnesota nice” can either mean a tendency for most locals to be courteous, reserved and mild mannered, OR an aversion to conflict and confrontation – not wanting to say no! According to the Urban Dictionary it can be summed up as: “When I’m angry at someone, I don’t let them know. I just smile pleasantly to his or her face and then proceed to talk about them behind their back. I will most likely hold a grudge too.” Fortunately for me, I only encountered the former definition of “Minnesota nice!”