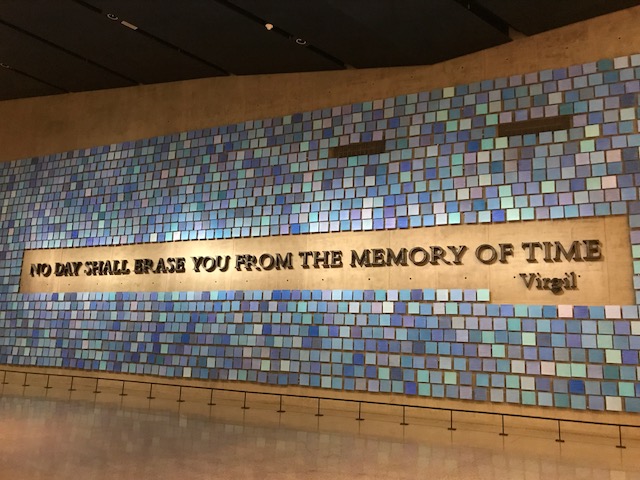 9/11 and the politics of memory

A couple of days ago, I was standing in a crowded subway carriage in downtown New York with a couple of other WPI fellows, when a man standing on the corner by the doors, caught our attention. He looked around age 20 and wore loose-fitting military fatigues and dreadlocks draped in a large turban. In one hand, he held a firecracker. In the other hand, he had a cell phone that he appeared to be using to film other passengers. His bizarre behavior made us increasingly uneasy.

When he started muttering “9/11 bomb, 9/11 bomb,” under his breath, we quickly got off at the next stop. Before boarding the next train, I managed to alert a subway employee who happened to walk past me on the platform.

Since no incidents on the New York subway were reported that day, I assume the man wasn’t dangerous. Nevertheless, the incident was a reminder of the extent to which, since 9/11, the threat of terrorism, real or perceived, appears to be everywhere: on the New York subway, at an Ariana Grande concert in England, or in every airport where you’ve got to go through increasingly tight security checks.

Terry Sauer, assistant managing editor for digital at Minnesota’s Star Tribune cited 9/11 as the most poignant story he had covered throughout his journalistic career, despite the fact that the attacks occurred in New York, because “that was the moment everything changed.”

Media coverage this week predictably focused on the 16th anniversary of 9/11 and hammered home the message that the events of that day should not be forgotten.

And what better place to reflect on the impact and significance of 9/11 than the new memorial museum, which we visited last Sunday? Visitors walk past the memorial, a huge square-shaped black fountain with the names of the victims engraved on it, and go down an escalator into a large space that resembles a mausoleum.

With recordings of the distressed phone calls made by those trapped in the Twin Towers, the personal belongings found amid the wreckage and a quote from Virgil – “No day shall erase you from the memory of time” – engraved into the wall in giant letters, this is an exhibition that speaks to visitors’ emotions.

However, the brief section on what Al Qaeda is and why the 9/11 attacks happened is disappointingly poor and omits important information, such as CIA involvement in Afghanistan during the Cold War and how the United States years prior to 9/11 had supplied arms to the Taliban, so they could fight Soviet occupying forces.

And by failing to delve into the complexities of U.S. foreign policy and uncomfortable truths, including how such policies contributed to the creation of the terrorist groups that perpetrated the 9/11 attacks, the museum, as Philip Kennicott points out in an op-ed piece in The Washington Post, is little more than “an oversized pit of self-pity and voyeurism, where visitors can feel personally touched by the deaths of people they didn’t know.”

“It was all one-sided,” says Afghan journalist Eltaf Najafizada, a correspondent for Bloomberg News and one of this year’s WPI fellows. “It was all about the attacks and ignored what happened before 9/11. They should show how terrorist groups like Al Qaeda have been funded and by what countries.”