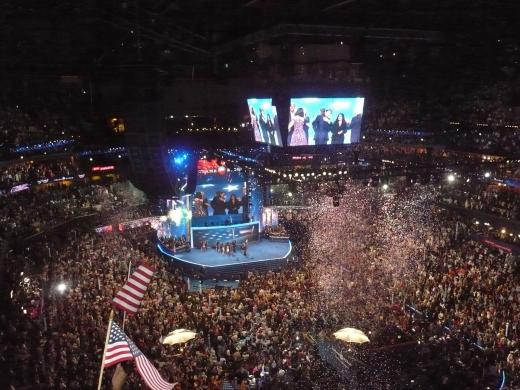 It was a tiring three-day journey, but it was worthy. As I have been working with international issues for ten years, I’ve always wanted to cover the United States elections, and I am now in USA doing exactly that.

And it began last week with the Democratic National Convention in Charlotte, North Carolina. By the time I was there with the other WPI fellows, I wrote some pieces for the news website at which I work in Brazil.

Following are these stories in descending order, along with a short summary explaining what they are about (well, if you are a Portuguese speaker, go directly to the story).

09.07 – Democrats portray Obama as American Dream promise. Report asserts that the main Democratic National Convention theme was to portray president Barack Obama as the only leader capable of mantaing the American Dream alive for everybody in United States, whereas Republican Mitt Romney was identified as member of a party which would lead the country to failed policies of the past.

09.06 – Obama accepts nomination and says US faces ‘choice of a generation’. News story about Obama speech at DNC.

09.06 – Products pro-Obama reelection fill spaces at the Democratic convention. To help financing US president campaign, Democrats pay from $ 2.5 for a button to $ 75 for a plastic bag.

09.05 – Michelle Obama speech motivates DNC volunteers. ‘She made ​​me realize how lucky she is for having a husband like Obama’, said a retired nuclear medicine technologist who works as one of 10,000 DNC volunteers

09.04 – Fruits, vegetables, eggs and umbrellas are prohibited at the Democratic Convention. Report about the list of prohibited items at DNC.

09.04 – At the Democratic Convention, Obama will try to prove he deserves presidential chair. News story presenting the DNC and the challenges facing Obama in his path to reelection.