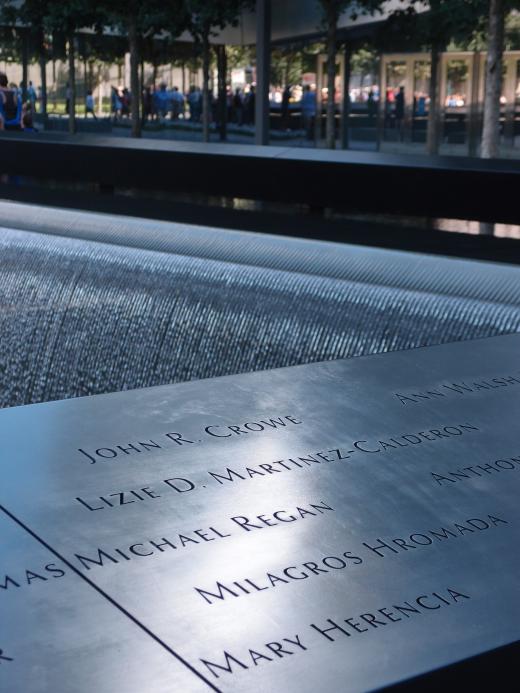 The 9/11 memorial in New York disarmed me at first sight.

It was such a simple place. A large square embedded to the ground, names of all the 9/11 victims written to the black marble. Water was flowing down the walls of the square, making a serene sound, shining in September sun. No need for further explanations, because there is nothing to explain. All you can do is show the hole in the ground, and who is missing.

The memorial, located in Ground Zero, opened to public in last week’s Monday. We visited it in Saturday. It was a pristine day, just like that Tuesday eleven years ago.

Since then, America has gone through sorrow, fear, anger and retaliation. Thousands of people have died, first in United States and then in much larger numbers in Iraq and Afghanistan. Osama Bin Laden and Saddam Hussein are gone. America has had it’s revenge. New Liberty Tower, which replaces Twin Towers, is almost ready and the former site of horror and destruction has been turned into a peaceful garden. Now it is time to heal and rebuild.

But many people still feel scarred. They carry World Trade Center with them, even in their lungs. Subway advertisements search for 9/11 survivors with breathing problems. 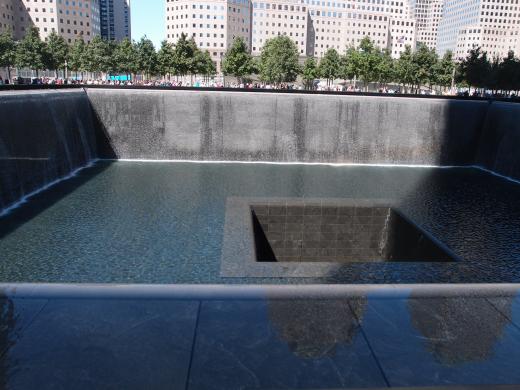 I walked around the square and examined the names. Letter shapes are cut hollow, which has an immense meaning. Those people are missing, but they have left a mark. Michael Joseph Duffy. Rita Blau. Edward Raymond. Mary Herencia. John R. Crowe. I began to ponder what is his middle name, what does R stand for. If asked, he would maybe have told that to me, or maybe not. People are sensitive about their second names. His wife would have known it, or his husband, son, mother. Someone must have loved him enough to know his second name. Thinking of that made me cry, which was a relief in that place full of silent emotion.

Watching the water fall down, I got a strong intuition of what it represents: time. No matter what happens, time keeps flowing and carries us further from our grief.

A square hollow in the middle of the pool collects the stream. Water disappears, and you cannot see where it goes. We don’t know where time goes. Where is John R. Crowe, and what will happen to us, we do not know. But you will always hear the water roaring, because times are never peaceful or easy for anybody. We all live in a shadow of a bomb.

We cannot grasp our own time. It is frail and almost invisible, and leaves our fingers wet. It seems violent and senseless and makes us angry. But if we step back, we can see the cascade of history forming. In 2050 we will see what this age of random violence and metal detectors was all about. What it built. Some losses are too big to be repaired, but time has the power of water smashing against rock, slowly working it, gradually making the hardest cliff smooth and easy to touch. And you can finally accept your grief as a part of your personal landscape, even see a great beauty in it. 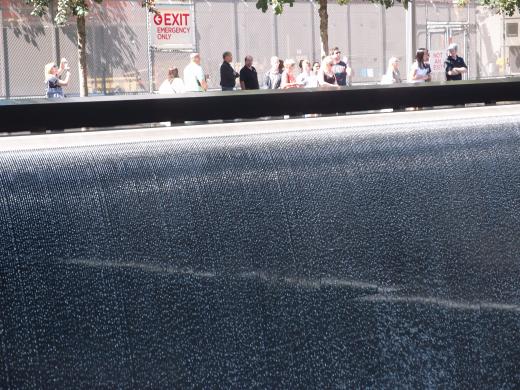 Me and my friend took pictures of each other. It was a perfect day. Suddenly she got sad.

“We are just taking photographs”, she said.

“But a lot people died here, in so many different ways. There was a lot of suffering.”

Can you heal anything with memorial? It is just an image.

Other kinds of images, rembrants of 9/11 horrors, are sitting deep. Twin Towers exploding and crumbling, poisonous clouds of debris and dust gushing down the streets, veiling the sky. The end of the world. People falling from the heights. Images don’t fade easily. People remember them and feel that all safety is gone. Words, promises and abstractions are almost powerless confronting them.

But I have read a poem about those falling men. Unfortunately, I can’t remember the author. The poem beautifully explains their descent, describes keys and coins falling out of their pockets, and ends up with lines: “I can do nothing to help them / except write this poem and leave the last line unwritten”. It is a beautiful, healing image, like a spark of light against the murky background. And that’s the only way to do it: fight images with other images. If you are haunted by images, in the memorial you can maybe feel that the dust is finally settled.

Goodbye, John R. Crowe, rest in peace. I don’t know your middle name, but let’s just leave it to R.